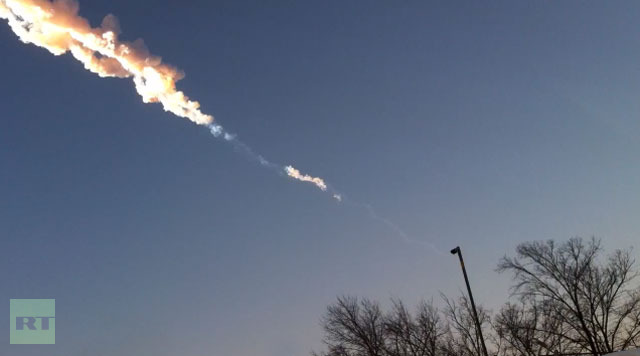 The regional Emergency Ministry said the phenomenon was a meteorite shower, but locals have speculated that it was a military fighter jet crash or a missile explosion.
“According to preliminary data, the flashes seen over the Urals were caused by [a] meteorite shower,” the Emergency Ministry told Itar-Tass news agency.
The ministry also said that no local power stations or civil aircraft were damaged by the meteorite shower, and that “all flights proceed according to schedule.”
Deputy Prime Minister Dmitry Rogozin, who also oversees the Russian defense industry, wrote on Twitter that he would speak with Prime Minister Dmitry Medvedev about the incident in the Urals.
“On Monday I will bring to Medvedev a straight picture of what has happened in the Urals and prospective proposals of how the country can find out about the dangers approaching Earth and deal with them,” Rogozin wrote.
Residents of the town of Emanzhilinsk, some 50 kilometers from Chelyabinsk, said they saw a flying object that suddenly burst into flames, broke apart and fell to earth, and that a black cloud had been seen hanging above the town. Witnesses in Chelyabinsk said the city’s air smells like gunpowder.

Screenshot from YouTube user Gregor Grimm
Residents across the Urals region were informed about the incident through a cellphone text message from the regional Emergency Ministry.
Many locals reported that the explosion rattled their houses and smashed windows.

Evgeniya Gabun wrote on Twitter.
“My window smashed, I am all shaking! Everybody says that a plane crashed,” Twitter user Katya Grechannikova reported.
“My windows were not smashed, but I first thought that my house is being dismantled, then I thought it was a UFO, and my eventual thought was an earthquake,” Bukreeva Olga wrote on Twitter.
The Mayak nuclear complex near the town of Ozersk was not affected by the incident, according to reports. Mayak, one of the world’s biggest nuclear facilities that used to house plutonium production reactors and a reprocessing plant, is located 72 kilometers northwest of Chelyabinsk.
It is believed that the incident may be connected to asteroid 2012 DA14, which measures 45 to 95 meters in diameter and will be passing by Earth tonight at around 19:25 GMT at the record close range of 27,000 kilometers.

According to unconfirmed reports, the meteorite was intercepted by an air defense unit at the Urzhumka settlement near Chelyabinsk. A missile salvo blew the meteorite to pieces at an altitude of 20 kilometers, local newspaper Znak reports quoting a source in the military.
Regnum news agency quoted a military source who claimed that the vapor condensation trail of the meteorite speaks to the fact that the meteorite was intercepted by air defenses.
Army units found three meteorite debris impact sites, two of which are in an area near Chebarkul Lake, west of Chelyabinsk. The third site was found some 80 kilometers further to the northwest, near the town of Zlatoust.
http://rt.com/news/meteorite-crash-urals-chelyabinsk-283/

ITN shows the event caught coincidentally on camera which happened to be ready and at the right location.