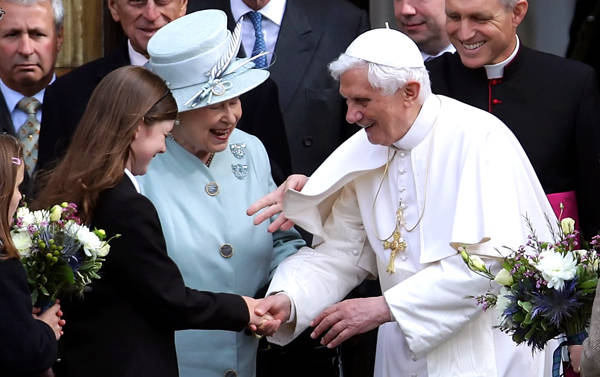 Anonymous said…
It should be noted that the Bolsheviks destroyed the Monarchy and Christian church in Russia too, so who is behind this really. 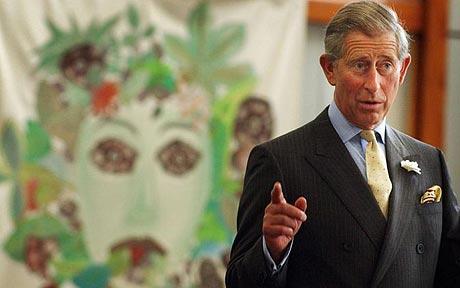 TAP – If the One World Government is behind moves to sack the Pope and the Queen, two thoughts occur.  She was so embroiled with their deceptions, she couldn’t do anything to stop them.  Royalty is basically a deception, by definition.  She’s now left it too late to stand up to them.  In a totalitarian system, the only God and the only Royalty allowed will be The State.  With Prince Charles hopelessly embroiled with the globalist environmental movement, she’s buggered basically.  He’s dragged them into the mire beyond any chance of survival.  If you don’t know what I mean, this Australian lady puts it over nicely –

Pope Benedict will go to jail for twenty five years for his role in Crimes against Humanity, and Vatican wealth and property is to be seized, according to today’s historic verdict of the International Common Law Court of Justice.
The Brussels-based Court handed down a unanimous guilty verdict from its Citizen Jurors and ordered the citizens’ arrest of thirty Defendants commencing March 4 in a Court Order issued to them today.
The verdict read in part,
“We the Citizen Jury find that the Defendants in this case are guilty of the two indictments, that is, they are guilty of committing or aiding and abetting Crimes against Humanity, and of being part of an ongoing Criminal Conspiracy”
The Jury ruled that each Defendant receive a mandatory twenty five year prison sentence without parole, and have all their personal assets seized.
The Court went on to declare in its Order No. 022513-001,
“The Defendants are ordered to surrender themselves voluntarily to Peace Officers and Agents authorized by this COURT, having been found Guilty as charged.
“The Defendants have seven days from the issuing of this ORDER, until March 4, 2103, to comply. After March 4, 2013, an International Arrest Warrant will be issued against these Defendants”.
The guilty parties include Elizabeth Windsor, Queen of England, Stephen Harper, Prime Minister of Canada, and the head officers of the Catholic, Anglican and United Church of Canada. (A complete copy of the Verdict, the Court Order and a list of the Defendants is enclosed on the accompanying you tube link).
The guilty verdict followed nearly a month of deliberations by more than thirty sworn Citizen Jurors of the 150 case exhibits produced by Court Prosecutors.
These exhibits detailed irrefutable proof of a massive criminal conspiracy by the Defendants’ institutions to commit and conceal Genocide on generations of children in so-called Indian residential schools across Canada.
None of the Defendants challenged or disputed a Public Summons issued to them last September; nor did they deny the charges made against them, or offer counter evidence to the Court.
“Their silence told me a lot. Why wouldn’t innocent people defend their own reputation when accused of such horrible things?” commented one Juror, based in England.
“These crimes were aimed at children, and were a cold and calculated plan to wipe out Indians who weren’t Christians. And the defendants clearly are still covering up this crime. So we felt we had to do more than slap their wrist. The whole reign of terror by state-backed churches that are above the law has to end, because children still suffer from it”.
The Court’s judgement declares the wealth and property of the churches responsible for the Canadian genocide to be forfeited and placed under public ownership, as reparations for the families of the more than 50,000 children who died in the residential schools.
To enforce its sentence, the Court has empowered citizens in Canada, the United States, England, Italy and a dozen other nations to act as its legal agents armed with warrants, and peacefully occupy and seize properties of the Roman Catholic, Anglican and United Church of Canada, which are the main agents in the deaths of these children.
“This sentence gives a legal foundation and legitimacy to the church occupations that have already begun by victims of church torture around the world” commented Kevin Annett, the chief adviser to the Prosecutor’s Office, who presented its case to the world. (see www.itccs.org, November 6 and January 30 postings)
“The verdict of the Court is clearly that these criminal church bodies are to be legally and practically disestablished, and their stolen wealth reclaimed by the people. Justice has finally begun to be be served. The dead can now rest more easily.”
Court officers are delivering the Order to all the Defendants this week, including to the Canadian Prime Minister, the Queen of England and to Joseph Ratzinger, the retiring Pope Benedict who is avoiding arrest within the Vatican after suddenly resigning two weeks ago.
The citizens’ arrests of these and other Defendants will commence on March 4 if they do not surrender themselves and their assets, as per the Court Order.
These actions will be filmed and posted at here in the coming week, along with further updates from the Court and its Citizen Agents.
Please see the accompanying you tube video.
Issued by the Central Office,
The International Tribunal into Crimes of Church and State
25 February, 2013
Brussels
Sent in by Lyndsey
COMMENT –  The US refused to sign on to the International Court but this shouldn’t stop the court from making judgements against Obama, Cheney, Bush, the Pentagon and others for their obvious crimes against humanity.
Let their assets around the world be seized. Let them hide in fear no matter where they go. Let all our current leaders around the world think of their fate if they engage in crime.
At last, a breath of hope for the world.