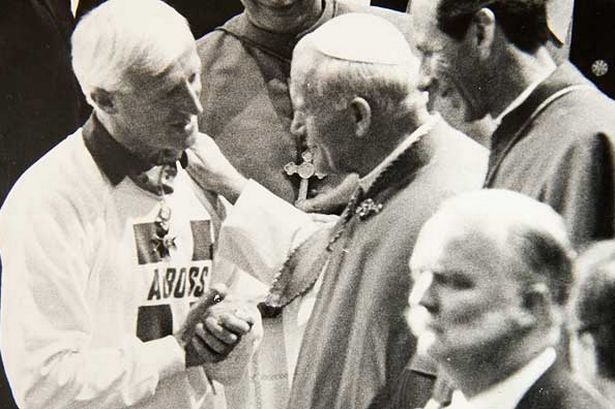 Bless you, you filthy pervert.

Colin thought you might find this news interesting from BeforeItsNews.com

Christopher Hitchens: “The pope’s entire career has the stench of evil about it”

Benedict XVI has claimed failing health for his decision to step down from the papacy. But ongoing power struggles and intrigue in the Vatican likely also played a role. The search for a successor could prove challenging.
Citing wavering strength of mind and body, Pope Benedict XVI announced his decision to resign from the papacy at the end of February. He will be the first pope to abdicate in nearly six centuries. In 2010, as allegations of pedophilic priests continued to swirl, Christopher Hitchens decried individual and institutional corruption within the church’s sacred walls. His original article is reprinted below.
On March 10, the chief exorcist of the Vatican, the Rev. Gabriele Amorth (who has held this demanding post for 25 years), was quoted as saying that “the Devil is at work inside the Vatican,” and that “when one speaks of ‘the smoke of Satan’ in the holy rooms, it is all true—including these latest stories of violence and pedophilia.” This can perhaps be taken as confirmation that something horrible has indeed been going on in the holy precincts, though most inquiries show it to have a perfectly good material explanation.
Concerning the most recent revelations about the steady complicity of the Vatican in the ongoing—indeed endless—scandal of child rape, a few days later a spokesman for the Holy See made a concession in the guise of a denial. It was clear, said the Rev. Federico Lombardi, that an attempt was being made “to find elements to involve the Holy Father personally in issues of abuse.” He stupidly went on to say that “those efforts have failed.”
He was wrong twice. In the first place, nobody has had to strive to find such evidence: It has surfaced, as it was bound to do. In the second place, this extension of the awful scandal to the topmost level of the Roman Catholic Church is a process that has only just begun. Yet it became in a sense inevitable when the College of Cardinals elected, as the vicar of Christ on Earth, the man chiefly responsible for the original cover-up. (One of the sanctified voters in that “election” wasCardinal Bernard Law of Boston, a man who had already found the jurisdiction of Massachusetts a bit too warm for his liking.)

There are two separate but related matters here: First, the individual responsibility of the pope in one instance of this moral nightmare and, second, his more general and institutional responsibility for the wider lawbreaking and for the shame and disgrace that goes with it. The first story is easily told, and it is not denied by anybody. In 1979, an 11-year-old German boy identified as Wilfried F. was taken on a vacation trip to the mountains by a priest. After that, he was administered alcohol, locked in his bedroom, stripped naked, and forced to suck the penis of his confessor. (Why do we limit ourselves to calling this sort of thing “abuse”?) The offending cleric was transferred from Essen to Munich for “therapy” by a decision of then-Archbishop Joseph Ratzinger, and assurances were given that he would no longer have children in his care. But it took no time for Ratzinger’s deputy, Vicar General Gerhard Gruber, to return him to “pastoral” work, where he soon enough resumed his career of sexual assault.
It is, of course, claimed, and it will no doubt later be partially un-claimed, that Ratzinger himself knew nothing of this second outrage. I quote, here, from the Rev. Thomas Doyle, a former employee of the Vatican Embassy in Washington and an early critic of the Catholic Church’s sloth in responding to child-rape allegations. “Nonsense,” he says. “Pope Benedict is a micromanager. He’s the old style. Anything like that would necessarily have been brought to his attention. Tell the vicar general to find a better line. What he’s trying to do, obviously, is protect the pope.”
This is common or garden stuff, very familiar to American and Australian and Irish Catholics whose children’s rape and torture, and the cover-up of same by the tactic of moving rapists and torturers from parish to parish, has been painstakingly and comprehensively exposed. It’s on a level with therecent belated admission by the pope’s brother, Monsignor Georg Ratzinger, that while he knew nothing about sexual assault at the choir school he ran between 1964 and 1994, now that he remembers it, he is sorry for his practice of slapping the boys around.

Very much more serious is the role of Joseph Ratzinger, before the church decided to make him supreme leader, in obstructing justice on a global scale. After his promotion to cardinal, he was put in charge of the so-called “Congregation for the Doctrine of the Faith” (formerly known as the Inquisition). In 2001, Pope John Paul II placed this department in charge of the investigation of child rape and torture by Catholic priests. In May of that year, Ratzinger issued a confidential letter to every bishop. In it, he reminded them of the extreme gravity of a certain crime. But that crime was the reporting of the rape and torture. The accusations, intoned Ratzinger, were only treatable within the church’s own exclusive jurisdiction. Any sharing of the evidence with legal authorities or the press was utterly forbidden. Charges were to be investigated “in the most secretive way … restrained by a perpetual silence … and everyone … is to observe the strictest secret which is commonly regarded as a secret of the Holy Office … under the penalty of excommunication.” (My italics). Nobody has yet been excommunicated for the rape and torture of children, but exposing the offense could get you into serious trouble. And this is the church that warns us against moral relativism! (See, for more on this appalling document, two reports in the London Observer of April 24, 2005, by Jamie Doward.)
Not content with shielding its own priests from the law, Ratzinger’s office even wrote its own private statute of limitations. The church’s jurisdiction, claimed Ratzinger, “begins to run from the day when the minor has completed the 18th year of age” and then lasts for 10 more years. Daniel Shea, the attorney for two victims who sued Ratzinger and a church in Texas, correctly describes that latter stipulation as an obstruction of justice. “You can’t investigate a case if you never find out about it. If you can manage to keep it secret for 18 years plus 10, the priest will get away with it.”
The next item on this grisly docket will be the revival of the long-standing allegations against the Rev. Marcial Maciel, founder of the ultra-reactionary Legion of Christ, in which sexual assault seems to have been almost part of the liturgy. Senior ex-members of this secretive order found their complaints ignored and overridden by Ratzinger during the 1990s, if only because Father Maciel had been praised by the then-Pope John Paul II as an “efficacious guide to youth.” And now behold the harvest of this long campaign of obfuscation. The Roman Catholic Church is headed by a mediocre Bavarian bureaucrat once tasked with the concealment of the foulest iniquity, whose ineptitude in that job now shows him to us as a man personally and professionally responsible for enabling a filthy wave of crime. Ratzinger himself may be banal, but his whole career has the stench of evil—a clinging and systematic evil that is beyond the power of exorcism to dispel. What is needed is not medieval incantation but the application of justice—and speedily at that.
Mea Maxima Culpa – Silence in the house of God – Official Documentary Trailer
This new film explores the charged issue of paedophilia in the Catholic Church, following a trail from the first known protest against clerical sexual abuse in the United States and all the way to the Vatican.
http://churchandstate.org.uk/2013/02/christopher-hitchens-the-popes-entire-career-has-the-stench-of-evil-about-it/

Who’s behind the Pope’s rushing to hide from his evil past, and who else is on the charge sheet…