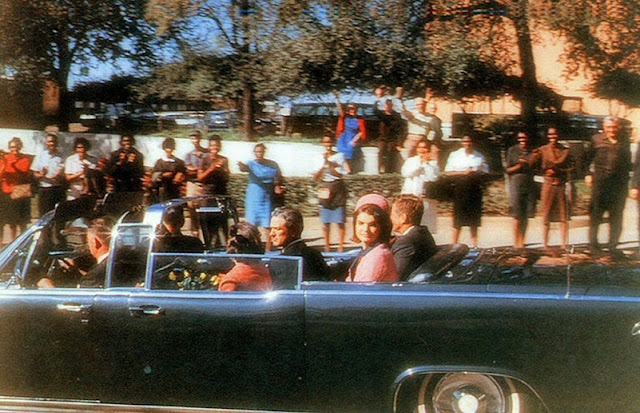 The ‘Killer Queen’ pictured as the motorcade turned into Elm Street.  Seconds away.

Hi Tap, I was very interested in Gordon’s Recent Atticle Relating to JFK  Jackie did it , this ties in well with the fact that she was a Catholic Jew, the favorite Fall Guys for The Jesuits. This gives Further Credence to this SCENARIO. Where you find “Jews” Changing History, You Will Always Find Jesuits Controlling From The Rear, & Hiding Behind The SMOKE & MIRRORS. SHE WAS ALSO AN MK – ULTRA SLAVE.

SO WE HAVE YET ANOTHER, CLASSIC JESUIT INSPIRED ASSASSINATION.

In the months after her husband was assassinated, Jacqueline Kennedy fell into despair, asking her Jesuit spiritual adviser at one point, ”Do you think that God would separate me from my husband if I killed myself?” That plea, and other exchanges with her adviser, the late Rev. Richard T. McSorley, were included in his diary and letters between him and Mrs. Kennedy that were made available on Wednesday by Georgetown University, where he was a theology professor. The recollections of Father McSorley, who died in 2002, were in a new book ”The Kennedys: America’s Emerald Kings” by Thomas Maier. John Files (NYT)

Mrs. Jacqueline Kennedy (née Bouvier) was a Jewess, a fact well hidden, but revealed by her cousin/step-brother, Gore Vidal, in his autobiography:
“… the ethnic surprise buried deep inside Gore Vidal’s much-hyped autobiography, … ‘Palimpsest: A Memoir,’ … [is that Jackie Kennedy’s] mother, Janet, was Jewish. Janet, who had Jackie with her husband John ‘Black Jack’ Bouvier, eventually divorced him and married Hugh Auchincloss, who was also Vidal’s stepfather.

“In the book, … Vidal offhandedly writes on page 372, ‘One should note that the first of Hughdie’s (Hugh Dudley Auchincloss) three high-powered wives was Russian, the second my mother, the third Jackie’s mother, Janet, born Lee or, as my mother used to observe thoughtfully, Levy.’ Vidal continues, ‘Apparently, Janet’s father had changed his name in order to become the first Jew to be a vice president of the Morgan bank. My mother wondered how Hughdie, a quiet but sincere anti-Semite, would respond when he found out.’ As for Janet Lee, he writes she used to say she was ‘of the Virginia Lees’…until the real Lees ordered her to shut up.’…” (Ahmed Rami quoting from the New York Post of 9th November, 1995.)

On the 22nd November, 1963, the United States President, John F. Kennedy, was murdered in Dallas, Texas. The method of assassination was a single gunshot to the head. Someone travelling in Vice President Lyndon B. Johnson’s car, immediately behind the president’s limousine, was filming the whole thing (as the following still demonstrates)!…………

According to his long-term mistress, who bore him a son, Johnson was sure the day before this atrocity took place that President J.F. Kennedy was going to be killed whilst being driven through Dallas. This implies that he knew there would be no untoward problem with the assassin, since she would be right next to her victim. However, a sophisticated weapon, such as a Smith & Wesson semi-automatic handgun, could quite possibly jam at the predetermined moment, spoiling Johnson’s (and his backers, including Aristotle Onassis) murderous plan. At such close range, however, a simple, crude pistol would be all that was required.
Something like this Deringer (more often spelt with a double ‘r’) would thus have been chosen; an extremely simple, easily concealed, one shot, miniture cannon

The point where President Kennedy was to be The sacrificed had been marked out. The big, black man in the foreground, seen in several of the above frames, positioned to the right of the sign, with his right arm extended was probably the marker for the car to slow down almost to a standstill (a cine film taken from the other side of the car distinctly shows how slow the car was going from the sign to the murder spot), someone then disabled the victim via a remote, electronic trigger, Connally examined the extent of incapacity and then Jacqueline Kennedy, once given the nod by Connally, immediately placed the gun in the predetermined position and discharged the chamber through her husband’s head. ……

President Kennedy’s reaction is not that of a victim of a gunshot or an electric shock, but that of someone who has been exposed to a lachrymatory agent (or lachrymator). These cause difficulty in breathing, paralysis and general respiratory discomfort. Even relatively mild ones can be very fast acting: “Tear gas is so fast-acting it’s amazing. It affects your throat more than it affects your eyes, in fact. I honestly felt like if I didn’t drink something my throat was literally going to fall out of my body.” (Source.)

There were many chemical and/or biological agents known to research laboratories and the military, even back in 1963. These are classified in various categories, three of which are the harassing agents (such as CN and CS gas), blister agents (such as mustard gas) and nerve agents (such as sarin – discovered in 1939 – and tabun) …………

It was necessary to get the liquid nerve agent onto JFK’s skin and to facilitate this the murderers made use of the fact that President Kennedy had a long-term back problem and always wore a steel-boned brace. The following two sets of photos purport to show this contraption after it had been taken off his body. ……….
John Kennedy was flown in, murdered within minutes and flown out, rather like a meat packaging plant operation.

How do you ensure that ‘Lyin’ Johnson is not shot? You do not shoot JFK from the front, because Johnson was travelling in the car behind. How do you ensure that Jewess Jacqueline Kennedy is not shot? You do not fire from either side, nor from the front or back. How do you ensure that President Kennedy is killed? You have to shoot him in the head from very close range. When a shot is fired from a gun, where is the smoke from the gunpowder? At the place of firing.
A little later that same day, 22nd November 1963, on board Air Force One, Johnson was sworn in as U.S. President in his home state of Texas, with a composed Jewess, Jacqueline Bouvier, faithfully by his left side and another Jewess (Johnson’s wife, Ladybug) on his right side.
In case you are interested here is a Linn :-The Kennedy Photo Album

On the 8th January 2009, Bernie drew my attention to a blog on abovetopsecret.com which was started on 2nd November 2007. An extract of the initial posting is as follows (with slight corrections for spelling mistakes, etc.) …

“I got talking to an old American guy tonight in an old London pub. He was a normal, likeable chap who seemed very honest and proud of his work; he didn’t seem like a liar and was quite humble and quiet as we chatted.

“He quickly changed the subject [of conversation] to the JFK assassination and stated Jackie shot him with a small weapon that was hidden up her sleeve.

“He said she was an MK-ultra victim and the best way to take him out ‘was in full view to dazzle the spectators, in plain view’.

“He said it was captured in the Zapruder film and was amazed it still hasn’t been spotted.

“It was a kind of weird conversation; he wasn’t drunk as he was drinking pints of water! Then he left … quickly and silently without even a goodbye. I’m still kinda spooked!

“What freaks me out mostly is he was smoking a really fat cigar and the people behind the bar didn’t even bat an eyelid. I tried to have a cigarette with him but was promptly told to go to the garden! Almost like he owned the place, or was invisible to the new smoking laws!