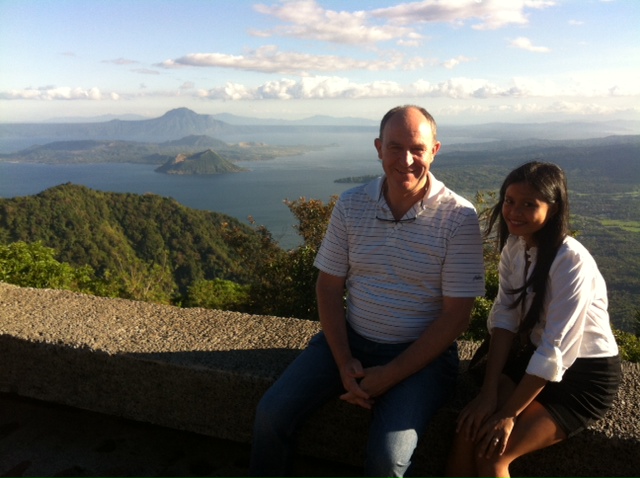 A rare picture of Mr & Mrs Tap Blog editor.
Tagaytay, Luzon, Philippines. Lake Taal.  No volcanic activity to report.  Deep blue skies.  Not a chemtrail in sight, although several airplanes.  You don’t see skies like this in Britain any more.
That said, the only clouds on the horizon were straight line jobs.  There are chemtrails here, but not as many as in Northern Europe as yet.
The poisoners of humanity have an easy enough task as it is, with lethally high doses of fluoride delivered in toothpastes and mouth wash, crashing fertility rates, along with mass sterilization through vaccination.
The air in the city centre is dreadful, and mains water is of dubious quality. The people avoid the fabulously nutritious coconut juice growing above their heads and instead consume coca cola with relish as if it were rare champagne.   As a result, diabetes is an epidemic, and obesity rates are soaring.   Filipinos are suckers to advertising, and have no idea there’s a hidden agenda to eliminate their health.  They aren’t anywhere near being ready to fight back.
The Tap Blog is a collective of like-minded researchers and writers who’ve joined forces to distribute information and voice opinions avoided by the world’s media.

12 Responses to “Filipinos have it all, but waste most of it”