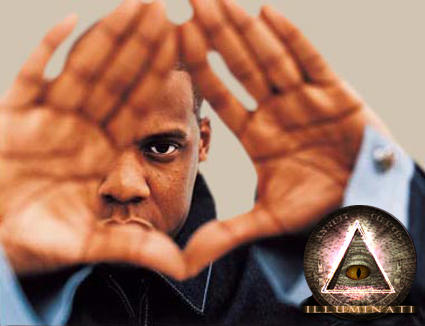 Husband Jay-Z gives a demo of the ‘evil’ sign

In January 2012, the theory that Beyonce and Jay-Z’s were associated with the Illuminati came back into fashion after the birth of their daughter, Blue Ivy. Conspiracy theorists on Twitter suggested that her name could be an initialism for “Born Living Under Evil, Illuminati’s Very Youngest.”[8] In April of that year, two single serving sites titled Jay-Z Illuminati[9] and Beyonce-Illuminati[10] launched, accusing both artists of using the secret society’s symbolism for attention while not actually being members of the group.

Throughout Beyonce’s performance during the halftime show, Twitter ran abuzz with speculations of her membership in the Illuminati (shown below) and sped up rapidly after she flashed the hand gesture on stage. As the second half of the game began, many of these tweets were immediately chronicled on Buzzfeed[13] and the Huffington Post[11] shared a screenshot of the gesture with tweets interpreting it as an Illuminati symbol. After the game ended, Buzzfeed[12] spoke with Fawell who said he was not surprised that she used the gesture.

In the two days following the Super Bowl, news of Beyonce’s hand gesture was shared on Bleacher Report[14], Yahoo! Sports[15], Discovery News[16], Inquisitr[17], The Examiner[18], the Blaze[19] and BoingBoing[20], though many of these sites concluded she was simply flashing the dynasty sign. On the 5th, conspiracy theory site Vigilant Citizen[21] broke down all of the suspected Illuminati imagery throughout Beyonce’s performance, including usage of lights and displays as well as the dresses worn by backup musicians.
The Tap Blog is a collective of like-minded researchers and writers who’ve joined forces to distribute information and voice opinions avoided by the world’s media.