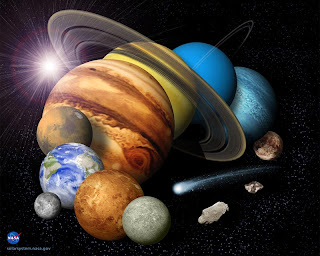 A typical solar system representation from NASA.  Pretty pictures, out of scale,  incorrect layout, and no explanation.  Apart from full marks for color,  all it achieves is to leave you worried about those ugly rocks flying around that might impact with earth one day.   The asteroid belt is in fact very stable, and the travel of comets regular and predictable.

I’m doing my very best to get my head around another Zecharia Sitchin book, this one called When Time Began – which somewhat illogically is the third one I am reading, although it’s actually Book V of The Earth Chronicles.

It’s moving the focus onto how the various time measurement systems were developed, by who and why.  Things like Stonehenge and the Pyramids are where I’m heading next in my contended ramblings through celestial history.

The raw material of time measurement systems are planetary movements.  For example the earth rotates approximately 360 times in one of our ‘years’ (365.25), which is the time it takes for the earth to make a complete revolution of the sun.  You might say that if time measures were meant to be metric, it would complete one revolution in something like 100 or 1000 earth rotations.  But it doesn’t.  365 is the figure, take it or leave it!

The dividing of each rotation into twenty four hours is of course arbitrary.  We could have had ten hours if we had preferred, or twenty.  Likewise we have sixty minutes in an hour, and sixty seconds in a minute.  It could have been 100, but whoever it was who decided on the measures of time millennia ago, pitched up on the use of 60.

Next up is how many years are there in an earth age.  That is calculated by reference to the fact that the earth, when measured at the spring solstice, doesn’t quite get back to where it started, as can be seen by reference to the stars.  In fact after 365 earth rotations (an earth year), the earth is about 55 seconds late in getting back to where it started.

This calculates to a figure of 1 degree of arc every 72 years.  For the earth to go all the way around (moving backwards as it were) and back to the start point takes an incredibly long time – 360 times 72 years no less – 25,920 years in fact.

To make things a little easier to take in, the ancient Sumerians divided the celestial clock up into a zodiac, familiar to us today for the position of the moon relative to the various ‘star signs’, from which we deduce the influence of the moon on our personalities.  The imaginary zodiac pictures were already worked out 6000 years ago, and possibly much longer ago than that.

Each star sign, or zodiac is allocated 30 degrees of arc, although some are wider than that, and others narrower.  Each one (currently we are approaching the end of Pisces) takes 30 times 72 years to pass – or 2160 earth sun revolutions.  That (pretty obviously) makes a figure of 36 when divided by 60.

Are you starting to notice anything yet about all these numbers?  The figures that we have no choice about – the numbers created by the planets as they move around each other, are not decimal.

They appear to have very close relationships to each other the more you examine them.  The universe cannot be an entirely random affair, which you would expect if it had all happened by chance.  Sixty is the figure which divides into all of the various numbers, which is no doubt one reason why the people who first recorded these planetary events decided that sixty minutes and sixty seconds, and twelve hours (X2) were the right numbers to work from – copying the apparent system of the Gods – sexagesimal.

If you follow the other pieces I have been writing about recently, mentioning the planet Nibiru, the same numbering system continues in similar vein.  Nibiru, according to Sumerian astronomers, completes a sun rotation every 3600 earth years.   It seems the main thing to recall in all these matters is that God multiplies by six first, then ten, then six again, then ten to achieve all his plans.

And that’s before we list out the metrics of the moon mentioned in the book ‘Who built the moon?’ where the relationships between earth, sun and moon are mathematically quite uncanny.  I have a long way to go with this topic yet, and I hope to find more interesting things by ploughing through these books.

It is still amazing that the Sumerians knew there were twelve planets in our solar system 6000 years ago, while we were still discovering planets up until 1930.  There were a thousand years and more when mankind believed the earth was the centre of the solar system and not the sun, as taught by the RC Church.

Yet the real story, of the sun being the centre, was well known millennia beforehand.  Why has humanity been put into a state of forced ignorance about our place in the universe, and its times, and kept there for so long?  That is the burning question.  The notion of hiding the truth from the ‘plebs’ predates the Romans, the Greeks and even the Egyptians.   Once we establish conspiracy as more than a mere theory (I believe we already have, 911 being the classic moment of revelation), we will be forced to look thousands of years into the past to identify the moment deliberate deception of the ruled by their rulers all started.

Forget the epochs that are taught in school, colleges and universities as where the modern world was created, i.e. ‘classical’ Greece, ‘ancient’ Rome or Ptolomaic Egypt.  I’m talking a number of thousands of years before those societies came into being.

As for the accuracy of the figures for Nibiru, there is always a variation as with Halley’s Comet being approximately a 75 year return, although it can vary by a year.  But the essential facts are correct.  The maths that controls the universe is not random.  The powers that be just like to keep you worried and ignorant, whenever they can, as per usual.  But we’re onto them, and are catching up fast.

19 Responses to “The universe is not a random affair”