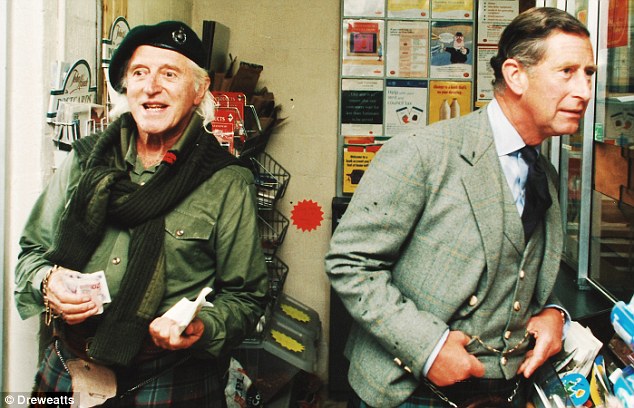 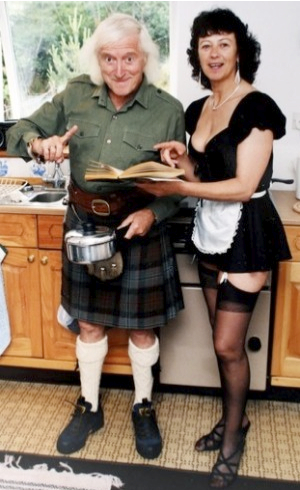 Jim laid on the ‘entertainment’

Although the mainstream media didn’t recognize the crimes committed by Jimmy Savile until after his death, there were many instances throughout his career where he was accused or implicated in child abuse cases.

In most cases he was able to avoid a whole lot of legal trouble and public scrutiny due to his media celebrity and his close ties to the power of the royal family.

The fallout from the Jimmy Savile case has probably just begun, but the backlash has already been considerable for anyone who has dared to speak out on the issue, with some people at the BBC even losing their jobs.

One case for example, involves a pedophile ring that was being run through multiple North Wales children’s homes in the mid 1980’s.  This ring was exposed when Labour councillor Malcolm King blew the whistle after learning of the child abuse through working so closely with the schools.

Just this week Malcolm King survived a car crash that happened under extremely suspicious circumstances.  While driving a car that had no prior issues, his brakes mysteriously failed, causing the car to lose control in a busy intersection and crash into another vehicle.  Luckily Mr. King only suffered minor injuries, but foul play was suspected enough for the police to impound the vehicle so it could be examined for signs of sabotage.

According to the UK Daily Star:

“THE whistle-blower who exposed the Welsh children’s home sex abuse scandal has cheated death in a suspect car smash ­after his brakes failed.  Police have seized care boss Malcolm King’s motor to see if it was sabotaged.  The car, a regularly-maintained Volvo S60, careered across a busy A-road and was hit side-on by an Alfa Romeo.  Afterwards Mr King, 68, who suffered a broken leg, found his brake pedal unattached and lying on the car floor.”

“I pushed my foot down hard on what I thought was the brake pedal but nothing happened….I’ve no idea whether the pedal was attached at this stage or not…The car flew across the junction and a car coming from my right smashed into my side…If I’d shot across the junction a split-second sooner I’d be dead because it would have hit where I was sitting rather than the bonnet. It doesn’t bear thinking about. My car, which is a write-off, is now in the hands of the crash investigators…It’s a good car and I’ve always maintained and serviced it regularly at the best garage in town.  The police officer at the scene told me they’d examine it very thoroughly. They said they’d go over it with a fine-tooth comb.’’

Either way it is still incredibly important to point out situations like this when they happen, because for so long throughout our history people in power have been able to make human beings disappear without anyone asking any questions or pointing out any suspicious circumstances.

Last week Brandon Turbeville of the Activist Post wrote a very revealing report on how high up this Jimmy Savile scandal goes.  In his report, Turbeville lays out the long personal history between Savile and the royal family, and discusses in detail the royal families connection to various pedophilia networks.  Not only that, but the article shows how their relationship seemed to develop through working with children’s homes and charities.

“Although Prince Charles’ friendship with Jimmy Savile, allegedly begun when the two met in the 1970s during the course of working with children’s wheelchair sports charities, is now well-known, the extent to which the Prince and the Pedophile were connected appears to go much deeper than the mainstream media reports let on.
Of course, the two having come in contact at a “charity” event for the disabled is not too far-fetched, even if it is being reported by corporate outlets. After all, using children’s “charities” as a hunting ground and a cover for his true motives was a notorious method used by Savile who actually lived in children’s homes and hospitals so as to be closer to his victims. This method is by no means specific to Savile, however, as many other sexual predators and pedophiles know exactly what areas of society to be involved in and what careers to pursue in order to gain access to their victims. Jerry Sandusky stands as a perfect example.”

Israeli premier Menachim Begin and the royal family’s connection to children charities and Jimmy Savile make this recent accident of whistle-blower Malcolm King all that more suspicious.
To add an even deeper level of suspicion it seems that there have been a long list of mysterious deaths surrounding these particular children’s homes.
Mutliple sources have listed the following deaths:

Brendon Randalls, former Bryn Estyn resident, died aged 27 from alcohol abuse in April 1994. Allegedly the victim of a serious sexual offence.Richard Williams was found dead in a car aged 18 in July 1994. Alleged to have suffered maltreatment while in care.Craig Wilson hanged himself in November 1994 aged 16.
Lee Johns, also known as Lee Homberg , former resident of Bryn Alyn where it was alleged he had been sexually abused. Died in February 1995 aged 37.
Mark Humphries hanged himself in February 1995 aged 31. Allegations of sexual abuse against care workers.
Simon Birley, former resident of Bryn Estyn, was found hanging in May 1995 aged 27. Allegations he had been sexually abused by care worker.
Tony Wallis found dead 1996.

Again, I’m not precisely sure what is going on here, but where there is smoke there is fire, and it gets even crazier than this.
The report that came out about the abuse at these homes was never released, and although many people think that it should be made public, The Independent reported last week that copies of the report were destroyed because the council that commissioned it feared it might be sued.
There are still a few copies that remain but they have yet to be made public.

Mr. King is one of the few people alive who have actually seen these official documents, which implicate many of the abusers with definitive proof and testimony.  As of right now, Mr. King is in recovery, but has said that this recent encounter will not scare him from getting back into the case to reexamine new ties that were uncovered with the Jimmy Savile Scandal.

2 Responses to “The prince and the pedophile”