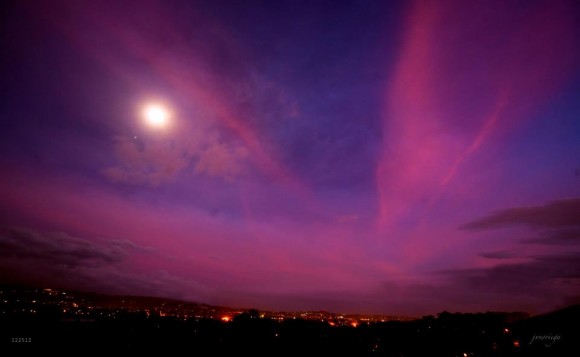 Sent in by Dan.  We were sent ‘my girlfriend’s moon pictures‘ by Adam a week or so ago, showing something speck like appearing alongside the moon.  According to this website it could have been Jupiter which is aligning with the moon this month.
This picture was taken at night over Manila.  I’ve never been quite sure about chemtrails over Manila in the day time, but this picture shows two or three quite clearly.  They’re aerosolizing the Philippines at night.  A correspondent from Cebu sent pictures that looked like chemtrails, but I insisted we needed to see them actually spraying to be sure.  If they spray exclusively at night, you won’t be able to.  I now agree with the Cebu commenter.  The Philippines is being sprayed.   This picture has convinced me.

The ones we saw from Cebu were daytime pictures, where the trails were broken up and had moved around.  It is possible the planes are coming from Thailand each day, using the airbase recently opened up there for spraying activities. The Filipino journalist R Zedinko, a codename, has been very quiet since reporting in to The Tap on the establishment of SEA4CARS weather modification activities in Thailand.  I hope he’s alright.

Here’s a report he sent in last year in June.


Let the Thai govt talk all they want. The chemtrailers are already at work!
Taken about a week or so ago. This is the one I narrated to you about. 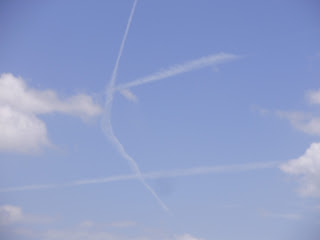 After I took these shots, we never had clear skies at all. Maybe because of the bad weather all over Asia. Or maybe no.
I need a better camera, I know. I am working on it.
It would be interesting to look at at the SEAC4RS logo, especially the maps encompassed by the circle.
Stay safe.
R.Zedinko.

TAP – It seems like his fears were right.  The US government is now spraying far and wide across South East Asia.  It takes a star-watcher to pick up the evidence.

TAP – is that a good enough explanation, Adam?

JULIA –  Someone said in this piece that only star watchers notice what’s going on. It’s a sad reflection of our society, I think, that so few people really notice the sky, and that’s why the chemtrailers can continue. If more people were more routinely observant of the sky, then they would never have got away with it. It’s a sort of lesson to us, that we need to tune in more with our natural world in order to take proper care of it. The more people that do it, the more will follow.

7 Responses to “The Moon aligns with Jupiter. Chemtrails over Manila.”