Speaking of movies I miss, I love Sci-Fi movies and the Matrix (at least one) was a most excellent peice of movie making, cutting edge in so many ways. And so much meaning and symbolism for such a main stream movie. Yet the brilliant cinematography, fight / action scenes and technology kept it interesting for a wide audience. 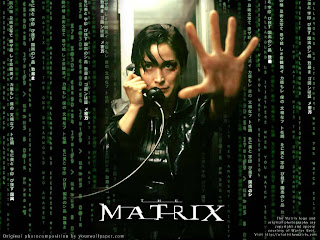 It’s absolutely loaded with meaning, of course everyone takes it as they want to. I thought it was interesting to think about a control mechanism and that you might be leaving a dream. But also about your own personal experience, that most people live in a place where there are large parts of their own thought processes they’re un denial about, that sense of awakening from delusion works on many levels.
There is also much Jewish metaphor in their and various political idealisations along with racism and stereo types.
In a blog post I found this:
“Many right-leaning critics immediately recognized and dismissed the film as another tired Marxist allegory that is typical of Hollywood. Firstly, Neo is depicted as living a boring, useless life working for a computer software firm in a modern city that is swamped with dazed and unknowing workers. This is a typical Marxist criticism of the evil ruling capitalist class and the oppressive society that they create. The company that employs him is portrayed as sinister and oppressive, and his boss is portrayed as cold and rude, reminding Neo that he is not special and that he is just like everybody else.
The “Agents” Brown, Smith, and Jones are specifically depicted as non-descript, white, and WASPish in appearance, which obviously implies that the government is run by evil white males that oppress and control the rest of society. When Neo emerges from his pod into the real world, he is rescued by Morpheus and his renegade band of ‘real world’ people who are primarily people of color or mixed racial appearance.
White males are portrayed throughout the entire Matrix trilogy as the ‘enemies,’ while non-white people such as Neo, Morpheus, the Key-Maker, and others are depicted as the noble heroes. This is an example of post 1960s cultural Marxism, which revolves around the supposed evil nature of white people and their murderous and oppressive treatment of non-white people. The “machines” that have taken over the world and use real humans as “batteries” are supposed to represent modern transnational corporations and their supposed inhumane treatment of workers and laborers.
The entire trilogy is rife with anti-white racism, and is intensely Left-wing in its underlying message. At the end of the first film, the Marxist/Communist politico-rock band Rage Against the Machine makes an appearance in which the refrain of the song is the repetitive crying out of ‘wake up.’ This is clearly a final appeal in the film for society to wake up from it’s comatose enslavement to the evil white capitalist machine.”
And also this: “The Jewish Metaphor of the Matrix Movies”
http://dis.4chan.org/read/lounge/1230866465
Cheers,
Toad Hall
The Tap Blog is a collective of like-minded researchers and writers who’ve joined forces to distribute information and voice opinions avoided by the world’s media.

3 Responses to “The Matrix movie was a warning”