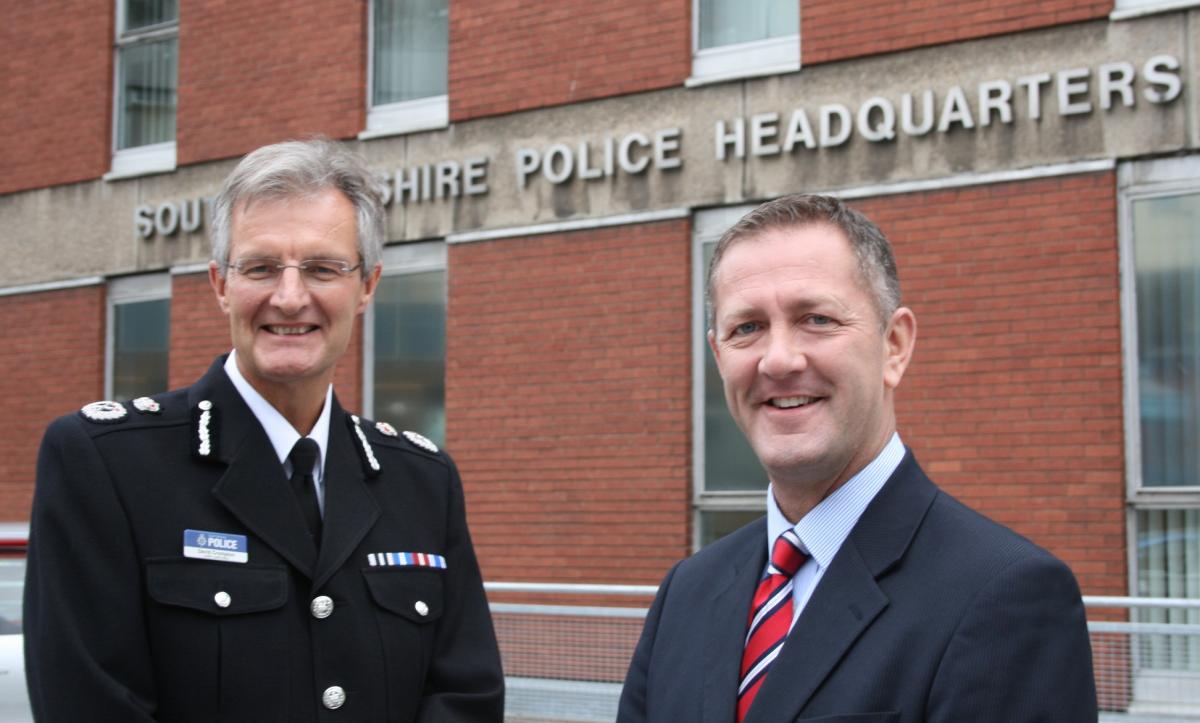 The men who could change everything if they wanted to.
South Yorkshire Police. Chief Constable David Crompton & newly elected Commissioner Shaun Wright.

Dear Mr Wright
1.       I am asking Police Commissioners to plug a significant gap in the police response to serious criminal activity within Family Court proceedings.
Having sought Counsel’s advice during my PCC campaign (http://davidgaleukip.wordpress.com/2012/11/12/kids-for-cash-court-scandal/ ), it is now clear that my assertion that the police must investigate criminal activity where evidence can deliver a prima facie case is correct. I now have a number of Police Commissioners who are asking to discuss this issue.
Many constabularies have routinely dismissed complaints of perjury, conspiracy to pervert the course of justice and other serious crimes by referring complainants back to the court. This is incorrect. In fact, judges are quite right when they tell complainants that ‘this is a matter for the police’. However, to date, this has left complainants / victims in a Catch 22 situation.
Can I ask you to ensure that South Yorkshire Constabulary now reverses its previous informal policy of not investigating complaints of criminal activity in the Family Courts? No one is expecting the police to do this without a prima facie case to answer but where there is, the police have a duty to investigate. That includes, where necessary, making an application to the court to release evidence contained within Family Court bundles.
2.       Related the above matter, I have in my capacity as a lay adviser reviewed a case involving Vicky Haigh (Cutts), a resident of South Yorkshire. Without going into significant detail, there are two police video interviews of a young child making allegations of serious sexual abuse, the transcripts of which that I have read, that apparently have never been put in front of CPS. Despite an un-evidenced allegation of ‘coaching’ by children’s services, the two transcripts taken from interviews four months apart, contain detail and consistency that would be un-coachable. They are entirely consistent with a genuine allegation of serious sexual abuse.

In relation to this case, as an ex-police officer and someone who has deep experience of delivering joined-up community services (inc police), I am deeply disturbed by the glaring holes within both the police’s and children’s services’ investigations. There also appears to have been a significant miscarriage of justice and perhaps even an agenda driven by those tangentially involved in the case. Can I ask you to urgently review this case with your Chief Constable and his team and to ensure that South Yorkshire doesn’t become another ‘Jimmy Saville’?

Please feel free to contact me formally or informally as you see fit.
Yours sincerely
David Gale – Derbyshire Police & Crime Commissioner Candidate | (+44 (0)7703 460360 | * david.gale@DavidGaleUKIP.org.uk  | 8 http://www.DavidGaleUKIP.org.uk
From: DAVID CUTTS [mailto:cutts401@btinternet.com]
Sent: 10 January 2013 19:46
To: david.gale@davidgaleukip.org.uk
Subject: Serious Criminal Inquiry
Dear Mr Gale
I understand that you have been contacting Police Commissioners with a view to them insuring that evidence of criminal activity in family court bundles is accurately investigated.
I would like to inform you that Doncaster Police are in possession of video evidence, transcripts drawings and an apparatus used, of the sexual abuse of a minor age under thirteen and I have evidence that a serious criminal inquiry has not been followed through with the correct procedure.
I received lame excuses by the police that no charges were being laid upon the man questioned in connection to the allegations made against him by the young child (aged 5).  I also found out that none of the evidence was forwarded to the CPS making me think that yet another cover up of sexual abuse of children has occurred. This worries me greatly not only because of the nature of the disclosures, but also I know that this child is living alone with the man she told police sexually molested her.
The Police Commissioner is Shaun Wright and I would ask you if you are prepared to contact him regarding your public campaign.
I hope to hear from you in the very short term.
Regards
Victoria Haigh

Who is David Gale?

Judges and lawyers will go to jail if a new Police Commissioner has his way.
David Gale, UKIP’s candidate to become Derbyshire’s first Police and Crime Commissioner, is setting out his stall to tackle what he says is corruption and criminality within the family justice system. Accusing judges and lawyers of routine involvement in perverting the course of justice, Gale says that where parents are encouraged to fabricate allegations and the court turns a blind-eye, there must be a formal criminal investigation.
Gale, who led a ground-breaking project to enable information sharing across agencies to protect vulnerable children, claims to have inside information: “I am shocked that professionals dealing with children are hushing up the wholesale abuse of the family justice system.”

TAP  – if UKIP successfully tackle the Conservative paedophile rings, UKIP seats in Parliament will no longer be an aspiration.  Nothing angers voters more than David Cameron protecting paedophiles in his own ranks.  Jimmy Savile might have fixed one more thing for Britain – the collapse of the Conservative Party.  Never mind the EU.  Here is an issue that will drive electoral victory again and again for anyone prepared to run with it.  David Gale, the best of British luck, mate.

The Cameroons are also happy to destroy the Conservative Party as a democratic force and convert it into a robotic tool of the globalists (like the Lib Dems and the Labour Party post Blair), which makes the process of UKIP advance somewhat inevitable.  The only thing is they also want to maintain their paedophile rings away from public view.  Expect serious defensive manoevres for political child rapists and murderers from all political parties.   To get elected,  make breaking the big party pedophile rings number one on the agenda.  And at local level, publicly fight for cases like Vicky Haigh’s.

Was Jimmy Savile a child murderer?

10 Responses to “South Yorkshire police, are you hiding the next Jimmy Savile?”