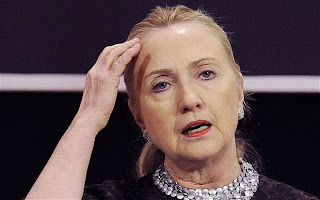 Hillary Clinton yesterday.  Are the Satanists starting to poison each other?

Pappy Bush, Hillary Clinton and Kate Middleton are all sick (TAP = unwell).  The reason suggested was they drank the blood of the innocents, but instead of it boosting their power, they got sick.

Do you know of any other sick Satanists???

14 Responses to “Satanists made ill by blood-drinking.”