Yesterday’s poorly worded/suspicious Cabinet Office statement on Prince Charles’ spy in the heart of government had the distinct whiff of a cover-up. Just who is the mystery man, or lady, seconded from the Royal Household? Why is he, or she, there? What exactly is he, or she, doing? Guido has learned that the representative from the Household of the Prince of Wales’ remit centres around a “specialist policy role”. He has reason to believe it is a lady as well.
Despite the obvious implication that someone with close links to the Royal Family is working on government policy, a Cabinet Office spokesman insists that is not the case and they have no role in legislation. The official kick back still refuses to reveal the staffer’s identity, this time on the rather tenuous grounds that it would not be fair since he/she is in a “relatively junior”. Senior sources in the department are now emphasising to Guido that the unnamed person’s role is unrelated to their work with the Prince of Wales and that high-security clearance is not “required”.
So why not just be completely transparent about the arrangement?
GUIDO FAWKES 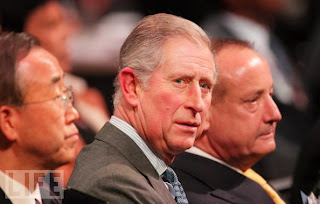 Those who follow this blog will already know that Prince Charles has a far bigger role in world affairs than is publicly admitted.  His Prince’s Business Leaders Forum, based at the United Nations, directs and controls the environmental policies and actions of the fifty largest corporations in the world.  The name of the PBLF was changed to IBLF, but the activities are still the same.  Charles plays a major role in planning the depopulation of the planet, articulating and implementing Agenda 21.  Read the late Joan Veon below, or listen to her on Youtube talking about what she found out by covering the UN for seven years.  She was amazed to find Prince Charles in secret playing the pivotal role.

Bearing that in mind, let’s take an educated guess at what Charles is up to, influencing affairs within government at this moment in time – something he does on a regular basis, with far more say in decision-taking than is ever allowed to be known publicly.
It’s going to be environmental, isn’t it.

That’s Charles’ big subject and always has been.

What’s on the environmental agenda this season?  The new Secretary for the Environment, Owen Paterson, has recently embarked on making speeches, saying the public needs to be re-educated as to the benefits of genetic modification of crops.  This is a big and sudden change-around.

GM foods were a no-go area for politicians prior to Owen’s appointment.  It’s as if a deal was cut.  You promote GM, Owen, and you can get away from Northern Ireland where you’ve been stuck since 2005.  They couldn’t have picked a nicer chap.

And what better idea to ensure the job gets done to the boss’ satisfaction (and I don’t mean Charles’ cousin, David Cameron’s satisfaction either), than to place one of Charles’ men in the cabinet office to keep the program on track.

GM foods are associated with falling fertility rates, and increasing levels of cancer.

GM can be targeted on achieving whatever ends are desired.  If those ends were the ones Owen believes to be the case, there could be benefits.  But GM can be used to reduce food output as increase it, make agriculture dependent on corporations, destroy farmers as happened in India (250,000 committed suicide facing financial ruin), and depopulate the planet, and that is Prince Charles’ game.  Just as with the Duke Of Edinburgh, the elites are seeking a ‘virus’ designed to thin out our numbers.  They call it euphemistically ‘eugenics’.  GM foods are a primary tool in achieving their desired ends.  No wonder they want it all kept under wraps.  Read ‘Seeds of Destruction‘ by William Engdahl in the reading list below.

For those of us with Christian values, this is the anti-thesis of what we believe for sustainable development is pagan. It perverts Genesis 1, 2, and 3 in that it puts the earth as being dominant over man and not man as having dominance over the earth-hence, you and I have no value since we have been demoted to the same value as an animal or plant. So what do you think is the end result of international sustainable development law? Enslavement.

Now who were THE players behind the birthing of sustainable development? To my surprise, it was Prince Charles. Not happy with the Christian faith, Charles turned to “para- psychology” which some define as “dabbling in the occult.” He was greatly influenced by the South African-born writer, explorer, and mystic Laurens van der Post who was a friend of his grandmother, the Queen Mother. The prince was also influenced by James Lovelock, a British scientist who formulated the “Gaia hypothesis, which today is known as the worship of the earth, a belief based on the Greek goddess Gaia, the Earth Mother. Charles concurs with the perversion of Genesis 1, 2, and 3.

Most people will not find Prince Charles or his environmental activities in the headlines of major newspapers. Nor do his biographies really explain his involvement, as there is basically a blackout on what he is really doing worldwide. In April 1991, fourteen months before UNCED, the Prince held a private two day international conference aboard the royal yacht Britannia, moored off the coast of Brazil. His goal was to bring together key international figures in an attempt to achieve a degree of harmony between the various countries that would happen at the Rio Earth Summit. Then Senator Al Gore was present, along with senior officials from the World Bank, chief executives from companies such as Shell and British Petroleum, the key NGO’s, and other officials.

Several years ago, I had the opportunity to interview Maurice Strong and specifically asked him about this meeting. He told me he was in London at a World Wildlife meeting hosted by Prince Philip and was asked by Prince Charles to accompany him to Rio for the April 1991 meeting. Furthermore, in 1990 when sustainable development had just been formulated by the Brundtland Commission, it was the prince who commended them for “bringing the term ‘sustainable development’ into everyone’s vocabulary.”

As sustainable development has evolved to the point where the teaching of Agenda 21 is called “Earth Sciences” in schools, universities, and colleges, our government has instituted Agenda 21 through the Presidents Commission on Sustainable Development. Throughout the U.S., there are cities that have adopted Agenda 21 and there are those that are now sustainable, such as “Sustainable Racine.” We must remember Russia did not fall to the communists all at once-it was city by city.

I wrote Prince Charles the Sustainable Prince in 1997 with major updates in 1998 and 2000. It is key and relevant for those who want to understand what is happening today. At every turn the Prince is still involved in the affairs of the United Nations, sustainable development, and public-private partnership. The Prince’s representatives are to be found at all the key global meetings, expounding and advancing this life changing philosophy. Perhaps we should wonder why the world still follows him and carries out his dictates.

Despite the Cabinet Office trying to keep them secret, Whitehall papers show that the Queen and Prince Charles have effectively been given a veto on a range of bills. This morning’s Guardian has gone big on the story that ministers have been seeking royal approval for government legislation on the quiet. Guido can now reveal that the Household of the Prince of Wales currently has an employee on secondment in the Cabinet Office. Two Cabinet Office sources Guido has spoken to were not aware of the mysterious staffer’s presence, and pressed for an official response they have so far yet to think up an explanation. Maybe he’s there to censor FoI requests about Charles’ secret lefty lobbying letters sent to ministers…

TAP  –
Sustainability applies to oneself.  The rest are expendable.
The Tap Blog is a collective of like-minded researchers and writers who’ve joined forces to distribute information and voice opinions avoided by the world’s media.