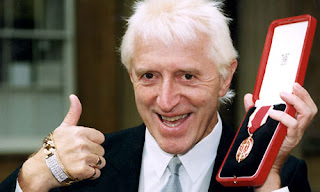 Savile – even in death paedophile’s are assured of Royal protection.

While waiting to make a statement in regard to the abuse I suffered in Halifax and Wrexham, this is the disheartening treatment I have received from Operation Yewtree. Will point out, Op Pallail
have been great so far, and have tried to help sort this out for me, although they are hampered
by the fact Op Yewtree are in control of my case, for the moment.

This piece can be released in full, although my name is to remain only as Kaz.

As a survivor of Bryn Alyn Community, the trauma’s inflicted upon my mind whilst in Wrexham only served to broaden my existing untreated mental health issues. My last diagnosis, less than 6 months ago, was Manic Depressive Schizophrenic with Multiple Personalities Disorders. I went undiagnosed and untreated for approximately 27 years.

When the child abuse investigations were re-opened earlier this year, I thought…. finally, my chance to have my say, maybe find a little peace along the way. So I came forward, and laid out the basic facts of my case to the authorities.

It was decided that my case fell under both Operation Yewtree (Jimmy Savile and Others) and Operation Pallail (2nd attempt at the Waterhouse mess).
Firstly, I was told that my Interview with Yewtree would be sometime this year, and Pallail would probably do their interview some time next year.

This was because Yewtree didn’t need to know I had left Bryn Alyn with a newborn baby, despite the fact that Calderdale Social Services were in charge of my case, they held the Care Order in place, and once every 6 weeks they would pay travel and board for my mum to visit.

Not good enough was my response to that.

I’ve waited 21 years to make my
statement. It’s a one-time deal, no 2nd takes, no extended head-screwing. So it took a couple of weeks-worth of phone calls, and it was agreed my interviews could be recorded at the same time, to enable a chronological verbal record of my life through the “Care” system.

I rang Halifax Police Station this morning to confirm my interview for 12pm Friday, to be informed that,
whilst I could have an Appropriate Adult or Legal Council present at the station, they would not be allowed in the interview with me. I could, if I needed, call for a break in the interview, and go into the waiting room to speak with my Appropriate Adult, but that was it.
Now I was always under the impression that, in this Country we have the right to have legal representation in direct attendance whenever a legally binding statement is made, be it witness, prosecution or defense.
It is also my understanding that Operation Pallail has repeatedly advised that all survivors/victims connected to these investigations be allowed “somebody to hold their hand” during the emotional rollercoaster that is a Police Interview.

1; I was a witness not a suspect.
My reply….so what?! It is a basic constitutional right to have Legal there.

2; It’s not a spectator sport (his words, not mine).
My reply….stunned silence.

3; To avoid any undue influence regarding the evidence given.

My reply……my Solicitor who has been my friend and confidante for 18 years, and wants me to get some kind of peace at long last would NEVER do anything that would risk my chances in this or any case. He has seen time and time again over the years the results of the damage that was inflicted upon me.

Not to mention the fact that Any solicitor is there purely to protect their client…..and after nearly 2 decades, he can see when my head starts to get “sidetracked” or agitated a lot earlier than most people can.

I have now made the phone company extremely happy, and my bank manager nervous, as I rack up a phone bill more akin to an LA post code, ringing the Children’s Commissioner for Wales, Victim Support, my Mental Health Support Worker, along with various other agencies to try to get this decision altered.

My last contact with Halifax C.P.T was at 4.30pm today when they rang me to “clarify once and for all, solicitors or appropriate adult in the waiting room only”.

Despite the best efforts of the Social Worker team attached to Operation Pallail, and the Office of the
Children’s Commissioner for Wales, to rectify this situation, I have just received word that the interviewing Officer has final say on who can be in attendance. This means the decision by Halifax Child Protection Unit, to not allow my Solicitor or an Appropriate Adult to be present, is to be upheld.
Unfortunately, this means I will not be making a statement on Friday to the police about the abuse I suffered in Children’s Homes in Wrexham and Halifax. My mental health is too fragile at this time to even think about sitting in front of a camera and a police officer to open the “door” and let the demons run loose in my head.

Since this last update, it has now been agreed by Halifax Police that they are to request the use of an
Intermediary Service; Somebody to come in, meet with me, and go away to advise the police on “how best to extract the information from me.” The actual interview is still to be conducted with me and an Officer in a room, on my own with any support sat in a waiting room.
Whilst on the phone to the Sgt, having told him the name of one individual I was waiting to make allegations about, and said I was under the impression he was dead.
He went to his PC, asked me to hold on while he
checked the details….. A moment later, he informed me of the individuals City of residence, along with his current name, age and told me he is on the Sex Offenders register for life.
I did not ask him for this indepth info, nor do I know why he chose to tell me.

As far as I was concerned, a simple dead or alive was enough to make my skin crawl.

Children’s Commissioner for Wales contacted me today, and have agreed to ask Operation Pallail to take over the interview process, although they don’t envisage being able to do this until January, which is understandable.
Let’s face it, if it weren’t my life, I sure wouldn’t be sitting through even this much, 4 days before Xmas.
Have also had contact from the Social Work team attached to Operation Pallail, and have asked them to push for Pallail to take over my Interview, and case. Let Yewtree go to them for info.
I no longer have faith in Yewtree to act accordingly in this matter.

I am in need of some serious help to get an outrageous decision changed.
All content is a true, accurate and documented (where possible) record of my contact with WYP for week ending 23rd Dec. 2012
Anything released by me is to simply be signed Kaz.
Thank you for taking the time to read this.

TAP – They can threaten you in private and bring about a collapse in your case.  You have to have legal support during police interview.  We all know where those people are coming from.  By drawing everyone into a process which ends up with a report,they can delay and finally obscure the truth.  The best way to get a story out is to do it yourself.  Why trust the authority that has brought all those things upon you, Kaz?  They have only one intention – to muzzle you.

JULIA –  You might find that Lawful Rebellion have some ways of dealing with unjust application of the law.

Yes they are clearly trying to reduce the impact of any accusations by separating it into two police operations. The main motivation from those at the top will be to twist and distort things to suit their own ends.

Iam very impressed Kaz how you are standing up for yourself. In doing this, you are not only asserting yourself and refusing to accept anything less than what you deserve, you are also challenging the preconceptions and indoctrination of all those official people who cross your path. And in that way, you are making a difference already, and creating a ripple effect of good all around you, and much further too.

There is something else sinister at play here, I know from similar experience. If you do not have someone close to you (such as your solicitor), to BEAR WITNESS at your interview, they will be able to play havoc with your mind afterwards. They will be able to twist what you say to their own ends. Then you will start to question your own sanity. your memory against what they claim happened. When you are already in a vulnerable state from reopening traumatic wounds, it is easy for them to convince you your memory is wrong. And you will start to feel insane. If however, you have a witness who is on your side, your witness can reflect back to you what happened, and you then know that you are the sane one and that the system is the crazy one.
Another method is to write down everything whenever you can, the main purpose is again to hold on to your sanity. Because this is what they want to destroy.

P.s. It’s Bill Maloney from Pie n Mash
The Tap Blog is a collective of like-minded researchers and writers who’ve joined forces to distribute information and voice opinions avoided by the world’s media.