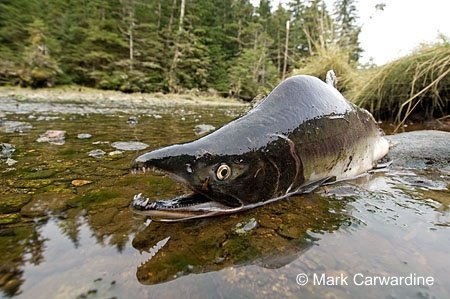 On December 21, 2012 — while everyone was busying themselves with preparations for holiday festivities—the US Food and Drug Administration (FDA) took a giant step closer toward the final approval of the first genetically engineered (GE) fish food — a salmon designed to grow abnormally fast.1
It’s a move that many, including myself, have worried might happen, and it now appears the first GE fish could reach your dinner plate within the next year or two, unless a sufficiently strong opposition is mounted.
According to the FDA,2 the GE salmon is “as safe as food from conventional Atlantic salmon,” but many have brought up significant flaws and limitations of the environmental assessment (EA) on which this conclusion is drawn. The FDA’s draft EA3 is now open for public comment.

What are the Potential Dangers Associated with GE Salmon?

According to Andrew Kimbrell, executive director of the Center for Food Safety:4

“The GE salmon has no socially redeeming value. It’s bad for the consumer, bad for the salmon industry and bad for the environment. F.D.A.’s decision is premature and misguided.”

Two years ago, GMO expert Jeffrey Smith, founder of the Institute for Responsible Technology, called the potential approval of genetically engineered salmon “a move that will go down in history as one of the most asinine and dangerous ever made by our government.” According to Smith, evidence5 suggests the buffed-up salmon might have higher levels of a potentially cancer promoting hormone, IGF-1, more antibiotics, and more of potentially life-threatening allergen(s).
In a recent statement, Michael Hansen PhD, Senior Scientist with Consumers Union said:6

“The Environmental Assessment (EA) states that the FDA has found that the salmon is safe to eat. However, we are deeply concerned that the potential of these fish to cause allergic reactions has not been adequately researched. FDA has allowed this fish to move forward based on tests of allergenicity of only six engineered fish — tests that actually did show an increase in allergy-causing potential.” [Emphasis mine]

But that’s not all. The salmon — which contains a spliced-in growth hormone gene that makes it grow up to five times faster, reaching market size in about 18 months instead of three years — poses a significant threat to the environment and natural fish stocks as well. According to a Purdue University computer model that tracked the effects of releasing just 60 “Frankenfish” into a population of 60,000, there was a complete extinction of the normal fish in just 40 fish generations. It appears the larger size, which attracted mates more easily, combined with a slight reduction in survival rates, was a killer combination. Furthermore, according to Jeffrey Smith, Canadian scientists also engineered their own set of fast growing salmon and tested their behavior in tanks with other fish.

“When there was sufficient food, all was fine. When food stocks decreased, the Frankenfish freaked,” he says. “They became cannibals, attacking and killing other fish — whether GE or natural. Their unexpected behavior resulted in population crashes or complete extinctions in the fish tanks. The study also suggested that if released, these ravenous aggressive salmon would pursue and consume other types of fish.”

The FDA pooh-pooh’s such fears. As reported by the New York Times:7

“The agency [FDA] said the chance this would happen was ‘extremely remote.’ It said the salmon would be raised in inland tanks with multiple barriers to escape. Even if some fish did escape, the nearby bodies of water would be too hot or salty for their survival. And reproduction would be unlikely because the fish would be sterilized, though the sterilization technique is not foolproof.”

The issue of the sterility of the fish is a can of worms in and of itself. According to Hansen:

“…We are also concerned that FDA puts great weight, in their finding of ‘no significant impact,’ on the fact that the engineered salmon would be sterile females. However FDA indicates that only 95 percent of the salmon may be sterile, and the rest fertile. When you are talking about millions of fish, even one percent comes to thousands of fish. Moreover, perhaps even more important, the fish at the egg production facility in Prince Edward Island, Canada would obviously not be sterile — otherwise they could not produce eggs…”