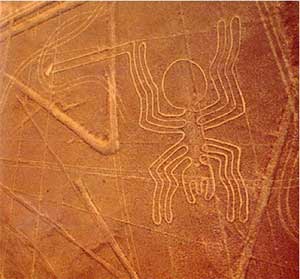 Images only visible from the air, made thousands of years ago.
And you think there were no craft flying until the Wright Bros?
We still have no idea how the pyramids were built, and countless other edifices from pre-history.
The technology of our own age seems the most lacking.

Lighting the fire during a cold winter evening a resident of Vladivostok found a rail-shaped metal detail which was pressed in one of the pieces of coal that the man used to heat his home.

Mesmerized by his discovery, the responsible citizen decided to seek help from the scientists of Primorye region. After the metal object was studied by the leading experts the man was shocked to learn about the assumed age of his discovery.

The metal detail was supposedly 300 million years old and yet the scientists suggest that it was not created by nature but was rather manufactured by someone. The question of who might have made an aluminum gear in the dawn of time remains unanswered.

http://english.ruvr.ru/2013_01_19/300-million-year-old-UFO-tooth-wheel-found-in-Russian-city-of-Vladivostok/
The Tap Blog is a collective of like-minded researchers and writers who’ve joined forces to distribute information and voice opinions avoided by the world’s media.