The double arch logo – a Masonic symbol, nothing to do with the letter ‘M’.

Over the past couple of years, we’ve learned the unsavory truth about “pink slime,” reconstituted meat, and how the use of meat glue cheats you out of your hard-earned money at the grocery store and threatens your health.
We’ve also learned that fast food fare such as McDonald’s hamburgers contain so many chemicals and so few real food ingredients that a burger fails to show signs of decomposition after more than a decade…
The famous McDonald’s McRib also came under closer scrutiny, and turned out to be something less than mouthwatering. The McRib sandwich is a non-standard item on the fast food restaurant’s menu;1 its annual return is always advertised with great fanfare — last year it even made the headlines on ABC News.2
The pork sandwich is described as a tasty fan favorite slathered in tangy barbecue sauce, slivered onions and tart pickles, served on a hoagie style bun. Sounds perfectly normal, but what’s it made of, really? In a November 2011 article, CBS Chicago news3 spilled the beans on this seasonal favorite:

“More than 70 ingredients make up the McRib and, yes, one of them is pork. But as CBS 2’s Vince Gerasole reports, there’s also an ingredient that can be found in shoes… [Registered dietician Cassie] Vanderwall gave the McRib a closer look and found the McRib has azodicarbonamide, which is used to bleach the flour in bread. It has other uses. ‘It could be on your yoga mat, in your gym shoes, in your anything that’s rubbery,’ Vanderwall said…

Then there’s the pork – which is really restructured meat product. In other words, it’s made from all the less expensive innards and castoffs from the pig… Vanderwall said the McRib ingredient list ‘reminds me of a chemistry lab.’”

To see pictures of a ‘deconstructed’ McRib sandwich, check out foodfacts.info’s McRib page.4 It sure doesn’t look so appetizing anymore once the sauce is washed off and the meat sliced in half. In fact, it can barely pass meat, which was the point CBS news tried to make in the first place. 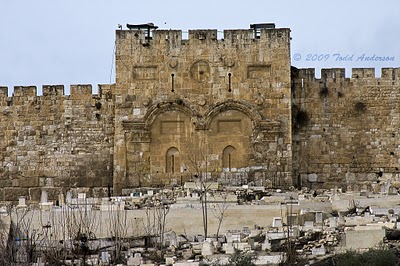 Jerusalem’s Eastern Gate
The Tap Blog is a collective of like-minded researchers and writers who’ve joined forces to distribute information and voice opinions avoided by the world’s media.