Can you make out all the names?  Leon Brittan.  Harvey Proctor, and someone called Clark.
Can someone do a full translation? 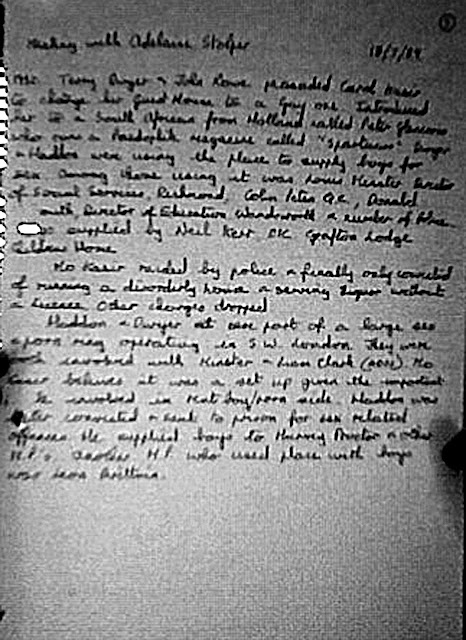 Mr. Tony Dwyer & John Rowe, persuaded Carole Kasir to change her Guest House into a Gay one.  Introduced her to a South African from Holland called Peter Glucerio who ran a Paedophile magazine called “Spartacus”.    Dwyer & Haddon were using the place  to supply boys for sex. Among those using it was Louis Minster, Director of Social Services, Richmond, Colin Peter QC, Donald South, Director of Education, Wandsworth,  –  a number of them supplied by Neil Kerr C.I.C. Grafton Lodge Childrens Home.

Mrs Kasir raided by police and finally convicted of running a disorderly home & serving liquor without a licence, other charges dropped.
Haddon & Dwyer at there part of a larger sex & porn ring operating in SW London.They were both involved with  Minster – Lison Clark (core). Mrs
Kasir thinks it was a set up given the importance.
He involved in rentboy/porn side. Haddon was later convicted and sent to prison for sex related offences they supplied boys to Harvey Proctor & other M.P.’s
Another MP who used the place with boys was Leon Brittain.  ENDS
I saw this chap the other day holding stuff up, I think it was on the Needle Site, or similar, but didn’t take much notice  as I was interested in other stuff, & it looked too difficult to read, which has proved to be the case, though I notice there are a few that are not as difficult.
Someone else can do the next one!
Another document mentions Edward Heath.
The above document Sent in by Jamie.
This is where they’re coming from.
http://postimage.org/gallery/7pkkeq9g/
Here’s an earlier post with another page of leaked evidence.
From The Needle Blog –
Don’t Be Distracted ! by The Needle Blog, December 19, 2012
“9 MPs implicated in paedophile ring along with other VIPs. 7 of those MPs are still living. Exaro know the names.
Documents identify 2 former Conservative cabinet ministers.
7 Further MPs
4 Other Tories
2 Labour
1 Liberal
1 Labour MP and Liberal have since died
Several figures with links to Right Wing Conservative Monday Club
Others include leading figure in National Front, now dead
A Sinn Fein member
2 Buckingham Palace Officials
2 Pop Stars
Some stayed under false names at guesthouse. With REAL identities shown alongside.
Against the name of one ex minister is written ”Sauna only, ‘Roger’.”
Anthony Blunt said to have used the name ‘Antony Goldstein’.
Documents identify some 16 boys recruited from local care home.”
The Tap Blog is a collective of like-minded researchers and writers who’ve joined forces to distribute information and voice opinions avoided by the world’s media.