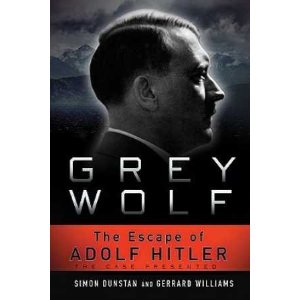 “Grey Wolf – The Escape of Adolf Hitler” a film by British Author and Director Gerrard Williams is to have it’s world premiere in the German Capital, Berlin in early February. The film is based on the shocking revelations contained in Williams’, a former International TV journalist, and Military Historian Simon Dunstan’s international bestseller of the same name.

The book is currently published in 25 countries. Marked as “History” by its publisher Sterling, “Grey Wolf” Williams and Dunstan insist is historically accurate. With over 27 pages of references and 291 detailed sources the book presents a compelling version of History that has been hidden for almost 78 years. Williams and Dunstan have spent the last seven years researching the subject, writing the book and making the Film. Dante Venesio heads up the Argentine cast in a startling portrayal of Hitler in exile. Supported by Maria Heller as his wife Eva, Pietro Gianni as Martin Bormann, and Martin Gianola as a chilling SS officer, “Grey Wolf” presents dramatized testimony of Hitler’s life in exile in Patagonia and his eventual death there on February 13th 1962 at 3 pm.

Contacted at his home in Northern France, Williams said, “I cannot think of a better city to premiere “Grey Wolf” in than Berlin. It is here that the final death throes of the Third Reich took place, and the city that Hitler escaped from. What has amazed me is that despite the complete lack of forensic evidence to either Hitler or Eva’s death, this story has been accepted as true for such a long time. Stalin always said Hitler had escaped, Eisenhower post-war said there was no evidence of his death, and the contemporary reporting from the BBC, Time, and all of the major international News agencies all say the Soviets did not find a body.

It’s now been confirmed that the skull the Russians have always said was Hitler’s is that of a woman too old to be Eva Braun! We also have the statement of the pilot who flew Hitler and his escape party out of Berlin and the evidence of a wounded SS officer who saw their plane land in Denmark.

That, plus the eyewitness statements from Argentina and reports from the files of the FBI make for a completely different history that the one we have been taught. “ Williams and Dunstan are also convinced that Martin Bormann – known as the Brown Eminence and the man who had planned Hitler’s escape with the help of members of the US intelligence services – SS Gestapo Chief Heinrich “SS” Muller and Hitler’s brother in law SS general Hermann Fegelein also survived the war. Williams said, “The evidence for Bormann’s survival is simply overwhelming – despite the then West German Government announcing they had positively DNA tested Bormann’s remains in 1993.

The Germans have never named the “83 year-old relative” they cross matched the DNA to, and Bormann’s family had no knowledge of any such person. We have living witnesses to Bormann’s survival in Argentina and masses of documents to corroborate this.”
Williams and Dunstan are currently writing their second book, “The Spider’s Web” which goes into further details of what Williams described as the ” Biggest Lie of the 20th century”.
For further details:
Contact: Gerrard Williams
E-mail: Williamsgerrard@Hotmail.com

TAP – 911 showed us that governments lie to the people, and falsify events.  Are people about to get it that WW2 was another false event with many aspects, believed at the time, being simply not true.  I read Grey Wolf – The Escape Of Adolf Hitler.  As usual the headline of the myth-busters seems incredible.  You need to read the detail. Then you know.

The escape of Hitler is only a fraction of the real story.  Bormann ran Hitler for the Illuminati who controlled the theatre of WW2 on all sides, Churchill, Hitler, Roosevelt and Stalin.  The results of each battle was decided in advance.  The outcome of the war was planned years in advance.  That’s how the would works….by design, not by accident.

HItler was trained by the British at Tavistock in 1912.  He was an Illuminati asset.
The Tap Blog is a collective of like-minded researchers and writers who’ve joined forces to distribute information and voice opinions avoided by the world’s media.