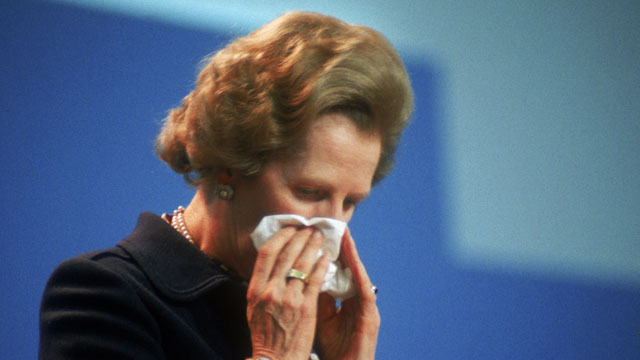 Others were in on it.  Willie Whitelaw was, according to Gordon Logan.

Three prominent pro-European Community political ideologues (dupes), Douglas Hurd, Michael Heseltine and Leon Brittan, all members of Thatcher’s Cabinet at the time, were ‘inexplicably’ not present in the hotel when the bomb exploded.

The Editor has been authoritatively informed that they appear to have been tipped off in advance. When they returned they commiserated with the rest of the survivors over what had happened. All three, evidently (as reported to us) knowing what was to happen, appear to have blood on their hands. In summary, this was an ‘act of war’ perpetrated by DVD with the full authority of the German Government against the United Kingdom, employing the DVD-sponsored Provisional IRA as cover.

• THE EUROPEAN UNION COLLECTIVE:
Students of the long-range pan-German hegemony and control operation known as the European Union will be aware that the Maastricht Treaty of 1992 (which this Editor fought hard against) was a crucial ‘stage’ in the evolution of the European Union Collective.

• THE TREACHERY OF JOHN MAJOR:
Passage of the enabling bill bringing this alien and deliberately confusing document into UK law was severely compromised by a rebellion of backbench Conservative Members of Parliament. At the last minute, Mr Michael Spicer MP (who received a knighthood for his pains) persuaded all these ‘rebels’, whom John Major, the Prime Minister had referred to as ‘bastards’, to support the legislation, with one exception (Rupert Allason, whose literary name is Nigel West: He managed to be absent from the House of Commons lobbies when the count was being taken).

It now transpires that Prime Minister John Major was told by the German Chancellor, Helmut Kohl, that he must sign up to Maastricht, ‘or we will blow up London’, a.k.a. ‘we’ will have our clients, the Provisional IRA and the IRA itself step up the terror and bombing campaign on the British Mainland.
Major, allegedly a de facto DVD asset or dupe, was told that if you do sign up, Herr Major, ve vill arrantch a ‘peace process’ for Northern Ireland for you, which vill make you look like a hero. Oh, und Sie mussen auch support uns over the break-up of Yugoslavia (a DVD-directed pan-German operation which resulted in 250,000 deaths). Major agreed: Hence Spicer’s pressure on the rebel MPs to ‘tow the line’. The country was betrayed as a consequence.

• SABOTAGE OF CHINOOK HELICOPTER CARRYING TOP BRITISH INTELLIGENCE OFFICERS:
Meanwhile, key elements of the Royal Ulster Constabulary (RUC), with assistance from MI5, had become aware that German ‘Black’ intelligence was ‘running’ the Provisional IRA, a fact that came to the DVD’s notice. On 2nd June 1994, all the leading Northern Ireland experts from the RUC and MI5 (25-29 senior Police and MI5 officers) were required to travel to Northern Ireland, originally on board two Chinook helicopters. Some were understandably nervous at this prospect.

One of the pilots insisted on there being two helicopters, but was overruled, and the entire team was packed aboard one single RAF Chinook, which in due course was flown into a hillside near the Mull of Kintyre lighthouse, Scotland, in thick fog. For this operation, the DVD’s assets had rigged or interfered with the helicopter’s Inertial Navigation (INS) System. When the base coordinates were inputted, the software was tampered with. This kind of thing is standard DVD practice.

Britain therefore lost, in this further provocative and ruthlessly wanton ‘Act of War’ perpetrated by the pan-German ‘Black’ counterintelligence agency against the United Kingdom, almost its entire intelligence expertise on Northern Ireland. In September 1999, the Blair Government faced calls for a fresh enquiry to overrule earlier investigations, after ‘Computer Weekly’ had released evidence casting doubt on the reliability of the helicopter’s engine control software.

Previously, the two helicopter pilots – Flight Lieutenants Jonathan Tapper and Richard Cook – had been blamed, with the initial RAF Board of Inquiry in 1995 freely accusing the dead pilots of ‘gross negligence’. In February 2002, a House of Lords committee opposed the RAF’s verdict, concluding that there were no grounds for blaming the pilots.

Every cover-up excuse and platitude was brought forward for prejudging the issue so that secret intelligence confirming that the software had been tampered with, was never publicly ventilated, even though it was obvious, given the circumstances and casualties, that this was likely to have been a sabotage operation. In other words, as usual, high-level cover was being provided for the German Abwehr/Deutsche Verteidigungs Dienst. This SCANDALOUS state of affairs is exposed.

• PENETRATION AND PARTIAL SUBVERSION OF BRITISH INTELLIGENCE:
Just as DVD controls the CIA by the basic means described above (placing its own personnel and associates in the top slots), so does it effectively control (or seek to control) MI6. It achieves this at the present time because its primary MI6 asset is its chief, John Scarlett, as previously reported on this website. More specifically, MI6 is controlled by GO-2 (General Operations 2, dating from the Second World War) which not only controls MI6, but also has assets inside MI5. The former Director of MI5, Dame Manningham-Buller (who was nicknamed ‘the Mad Bull’) was reported to us to be a GO-2 infiltration. However the new MI5 controller, Jonathan Evans, is thought not to be a GO-2 asset. It is uncertain whether he has the depth of understanding and experience to grasp who Britain’s real enemies are. John Major and Tony Blair were/are said to be assets of GO-2.

• THE 7/7 ATROCITIES ON THE LONDON UNDERGROUND AND A BUS:
The atrocities committed on the London Underground and on a double-decker bus on 7th July 2005 were directed by DVD, Dachau, using Islamic revolutionary ‘assets’ and sleepers. Omitting the main details here, the outrage in appropriate London circles was such that Germany (and France, which was involved) were specifically told that the United Kingdom intended, as a consequence, to leave the European Union. Apparently what then happened was that, finally, this threat was watered down by the traitors in Downing Street and the UK intelligence community, to British acceptance of a total cessation of Provisional and IRA operations in Northern Ireland and on the British Mainland. It is likely that the British threat stands, should such terrorist ‘Acts of War’ be resumed at any time.

The order to proceed with 7/7 was given by former French President Jacques Chirac from his hotel room in Gleneagles, Scotland, to where he had flown from Singapore to attend a G-8 Meeting, after France had lost its bid to host the 2012 Olympics. It was monitored by GCHQ, the eavesdropping centre in Cheltenham, Gloucestershire, forming the basis for the ensuing showdown.

On that occasion, Britain missed its best opportunity to get clean out from under the pan-German long-range trap, the European Union Collective. If there are further atrocities, even the shooting of the Editor of this service, ‘you’ must immediately press the Government to implement its threat.

• FACT: The Brazilian named De Menezes who was subsequently shot dead by armed police at a London Underground station, was the electronics expert, working ultimately for DVD, who serviced the requirements of the 7/7 bombers. In another unspeakable cover-up, this fact was buried and the police had to endure consequent excoriation by the press and judicial process – an example of the failure of official will arising from the fact that despicable traitors hold high office in the United Kingdom, as in the United States, working to the ultimate remit of the DVD.

• THE TWO DRUG CARTELS FINANCING THE POLITICAL PARTIES:
DVD are the ultimate controllers of two drug cartels which service the financial needs of the two main British political parties. These two cartels run all the drugs in the United Kingdom, and they continue to do this because they are protected by GO-2 (General Operations-2) which controls MI6.

This situation will change as soon as John Scarlett is removed from his post, which must surely occur soon in the light of these exposures (in response to which, by the way, there has been a stony silence, apart from the shooting threat).

In addition, John Scarlett has been revealed to us as being among those allegedly renting a safety lock box or boxes seized in Mayfair, Edgeware and Hampstead, London, by the Metropolitan Police on 2nd June 2008, with all the prospectively compromising implications that this entails.

The two British drug cartels routinely replenish the finances of the political parties. An ambitious businessman or other aspirant to join the ‘Great and the Good’ is ‘tapped’, and asked to contribute, say, £1.0 million to the political party in question. It is then indicated that, in exchange, the ‘donor’ will receive £2.0 million into one of his offshore bank accounts. That is the model here. Whenever a prospectively compromising drug-linked prosecution looms, it is typically squashed by the Attorney General or by some other means (including messages delivered to certain corrupted judges).

The situation is exacerbated by the fact that certain UK political leaders are drug users and have spouses who are ditto. In the case of the Government, one of the main reasons for the campaign within the Labour Party itself to remove Gordon Brown from office, is concern about the fact that under Brown, the flow of funds from this corrupt source has dried up. The assumption is that by removing him as soon as possible, the Party’s resources can be restored by the time of the next General Election (now expected in 2010). We believe that any attempt to oust Brown will fail.

An earlier example of the drug flows drying up occurred when the Conservative Party was led by Ian Duncan-Smith, an honourable man whom the ‘Black’ forces within that Party – thought to be headed by the Germanophile Angus Maude – knew would be appalled if he were to discover how the Party was being, in part, financed. They plotted to remove him so that he couldn’t find out.

As a consequence, the flow-of-funds to the Party derived from drug-trafficking and managed by one of the cartels ceased, until Duncan-Smith was removed from the leadership.

22 Responses to “Heseletine, Hurd and Brittan inexplicably were absent when the Brighton Bomb exploded”