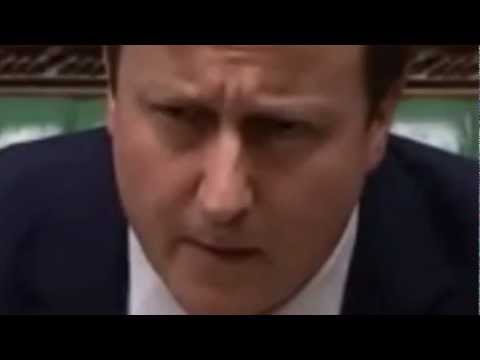 The moment Tom Watson questioned David Cameron about paedophile rings operating out of Number 10 Downing Street.  Cameron secretly set up Operation Fairbank to investigate the claims made by Tom Watson.  Fairbank’s exstence has since been leaked, as has some of the details of its enquiries.

TAP – I was researching this today, then found chris UK’s blog.  He’s written a cracking description of the notorious Barnes pedo-brothel implicating pedophile rings from No 10 Downing Street. A ring of rich and powerful people are said to have used it as a sordid playhouse – and were allegedly snapped and videoed with kids lured from a children’s home. One boy has alleged he was tied up, forced to perform a sex act and made to watch men having sex. A politician, top cop, judge, bishop and household names off the radio and TV are among those said to have been part of the ring between 1979 and 1982.

At these parties , young boys , specially brought over from several childrens homes would be plied with drugs and alcohol.

There is no more ordinary-looking row of suburban Edwardian houses in the country than Rocks Lane, south-west London. But nowhere has given rise to such an outlandish series of allegations than the one formerly known as Elm Guest House. The claims are now being re-investigated by the Metropolitan Police, decades after they were first made. Attempts have been made by care workers to lay bare the secrets of Rocks Lane but to no avail. Whatever the outcome of their investigations in the past, the police seem convinced that a number of serious wrongs need to be righted.

Operation Fairbank is a police investigation into alleged sexual abuse, predominantly the abuse of children, by British politicians in the 1980s. The investigation, led by the Metropolitan Police Service, started in late 2012. The investigation is currently a “scoping exercise” aimed at a “preliminary assessment of the evidence rather than a formal inquiry”. The existence of the operation was confirmed on 12 December 2012, after operating in secret for several weeks. Five officers are currently working on the inquiry

Operation Fairbank was set up following claims by Labour Party politician Tom Watson in the House of Commons that the police should look afresh at claims of a “powerful paedophile network linked to Parliament and No 10″. Watson raised the issue at Prime Minister’s Questions on 24 October 2012. He suggested that such a network may have existed in the past at a high level, protected by connections to Parliament and involving a close aide to a former Prime Minister; neither the aide nor the former Prime Minister were named. Watson referred to Peter Righton, a former consultant to the National Children’s Bureau, who was convicted of importing and possessing illegal homosexual pornographic material in 1992. Watson said that files on Peter Righton contained “clear intelligence of a widespread paedophile ring…One of its members boasts of a link to a senior aide of a former Prime Minister, who says he could smuggle indecent images of children from abroad.”

The investigation was first set up under conditions of secrecy. The Independent reported that it focused on claims of sexual abuse and the grooming of children, involving parties for gay men at the former Elm Guest House in Rocks Lane, close to Barnes Common in south west London, during the late 1970s.

The guest house was run and managed by Carole Kasir between 1979-1982, who died in 1990 at the age of 47. A party was raided by the police in 1982, following which 12 boys gave evidence that they had been abused by men at the house. Kasir was convicted of the charge of running a disorderly house, but allegations of abuse against children, and a subsequent reported investigation in 2003, were apparently not pursued. Two friends of Kasir gave astonishing evidence to the inquest of her death about alleged sexual abuse of children at the guest house Rocks Lane is a conspiracy theorist’s dream, taking in allegations of the grooming of young boys in care for sex, elaborate gay parties involving senior public figures including members of the Conservative Party, charges of a police cover-up and even the suggestion of murder. The police believe that in the context of the Jimmy Savile scandal and renewed claims over the treatment of boys in care in North Wales, there is every reason to look again at an extremely murky saga.

What is known is that in the late 1970s, the Elm Guest House on Rocks Lane was a safe, unthreatening meeting place for homosexual men free from the stigma of a sexual orientation legalised barely a decade earlier. According to a former friend of Carole Kasir, the guest house’s German-born manager, she initially regarded herself as offering gay men an opportunity to “be themselves” without fear. Rocks Lane, which overlooks a playing field, was known to homosexual men as it is close to Barnes Common, itself popular with gay men for cruising.

But Elm Guest House’s willingness to accommodate a small industry (“It became a convenient place for rent boys to take their clients,” says one person familiar with the place), began to attract the attentions of the local police force. One neighbour remembers a months-long police stakeout: “They were there all the time. Police hiding behind the trees to look at the property was a running joke with the neighbours.”

In 1982, the police learned that one of the guest house’s parties was to take place, and the Met’s notorious Special Patrol Group, the precursor of the Territorial Support Group, duly raided the property, resulting in a number of charges being brought against Kasir. The fact that two police officers were in the house at the time of the raid has fed the speculation. The IoS has established that, according to an officer closely involved at the time, two officers were embedded as guests in the property for two or three days, one even pretending to have a broken arm, hiding a police radio in a plaster cast to make secret recordings. If there was a cover-up, it appears not to have involved the local police force, who seem to have been assiduous in seeking to have the place closed down.

As many as 12 boys gave evidence to the police to the effect that they had been abused by men at the house, The IoS has established, but the only conviction was the comparatively minor one of running a disorderly house (ie, a brothel). “Abused boys do not always make the most impressive of witnesses once they get into the witness box,” someone involved in the case said. “The real unlawful activity was underage sex. The police should have been able to make the other charges stick, but the boys were only ever interviewed with a view to them being witnesses against Carole, not as kids who were abused themselves.”

The place continued to attract speculation. Who was at that party has never been established, but as time went on, more and more allegations began to emerge about Rocks Lane. The local police paved the way for the raid, but at some stage Special Branch felt the need to get involved. Why was that, some have asked, unless there was something even murkier going on? Child-protection campaigners alleged that boys had been taken from a local council-run home and abused, a line of investigation that police are now pursuing.

What makes the Rocks Lane story so tantalising for the media is the list of alleged attendees at the parties. One source suggested that Anthony Blunt, former keeper of the Queen’s pictures and an exposed Soviet mole, used to go the parties, but then Blunt’s notoriety made him a magnet for any number of fanciful theories. Those who knew him say the idea is absurd, and that his sexual tastes were far more conventional. Others have spoken of two High Court judges and a Foreign Office official attending. Chris Fay, a social worker who worked for a small charity, the National Association for Young People in Care (Naypic), has alleged that a terrified Kasir had shown him about 20 photographs of middle-aged men with young boys, taken at what he said were kings and queens fancy-dress parties, attended by a number of powerful and well-known people. One, Mr Fay alleged, featured a well-known public figure wearing nothing but a French maid’s apron alongside a young boy nude apart from a tiara.

In 1990, at the age of 47, Kasir was found dead in her flat. The coroner’s inquest concluded that, a diabetic, she had suffered an insulin overdose. Two Naypic employees told the coroner they believed that because she seemingly had not had an insulin injection for three days, she had been murdered, the victim of powerful people who feared she knew too much. Nonetheless, she was found to have committed suicide, worn down by an eight-year battle to have her son, who was taken into care after her conviction, returned to her.

The alleged presence of household names adds to the intrigue, but in a celeb-obsessed age, there is a danger that, should such names not materialise, Rocks Lane will be seen as “just another” child abuse case. Yet police sources fear that dozens of boys were either taken or on the run from care homes to be abused. By any standards, that should be a big story.

A interesting extract from a Jilly Cooper book – Angels Rush In

Here’s the full passage in Angels Rush In / The Common Years: