By Tony Cartalucci
Global Research, January 17, 2013
Url of this article:
http://www.globalresearch.ca/by-design-french-mali-invasion-spills-into-algeria/5319313
Exactly as predicted, the ongoing French “intervention” in the North African nation of Mali has spilled into Algeria – the next most likely objective of Western geopolitical interests in the region since the successful destabilization of Libya in 2011.

In last week’s “France Displays Unhinged Hypocrisy as Bombs Fall on Mali” report, it was stated specifically that:

“As far back as August of 2011, Bruce Riedel out of the corporate-financier funded think-tank, the Brookings Institution, wrote “Algeria will be next to fall,” where he gleefully predicted success in Libya would embolden radical elements in Algeria, in particular AQIM. Between extremist violence and the prospect of French airstrikes, Riedel hoped to see the fall of the Algerian government. Ironically Riedel noted:
Algeria has expressed particular concern that the unrest in Libya could lead to the development of a major safe haven and sanctuary for al-Qaeda and other extremist jihadis.

And thanks to NATO, that is exactly what Libya has become – a Western sponsored sanctuary for Al-Qaeda. AQIM’s headway in northern Mali and now French involvement will see the conflict inevitably spill over into Algeria. It should be noted that Riedel is a co-author of “Which Path to Persia?” which openly conspires to arm yet another US State Department-listed terrorist organization (list as #28), the Mujahedin-e Khalq (MEK) to wreak havoc across Iran and help collapse the government there – illustrating a pattern of using clearly terroristic organizations, even those listed as so by the US State Department, to carry out US foreign policy.” 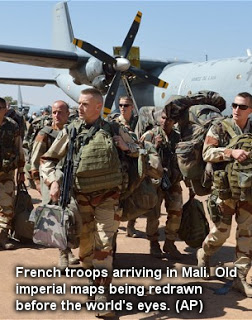 Now, it is reported that “Al Qaeda-linked” terrorists have seized American hostages in Algeria in what is being described by the Western press as “spill over” from France’s Mali operations.
The Washington Post, in their article, “Al-Qaida-linked militants seize BP complex in Algeria, take hostages in revenge for Mali,” claims:

“As Algerian army helicopters clattered overhead deep in the Sahara desert, Islamist militants hunkered down for the night in a natural gas complex they had assaulted Wednesday morning, killing two people and taking dozens of foreigners hostage in what could be the first spillover from France’s intervention in Mali.”

The Wall Street Journal, in its article, “Militants Grab U.S. Hostages in Algeria,” reports that:

“Militants with possible links to al Qaeda seized about 40 foreign hostages, including several Americans, at a natural-gas field in Algeria, posing a new level of threat to nations trying to blunt the growing influence of Islamist extremists in Africa.As security officials in the U.S. and Europe assessed options to reach the captives from distant bases, Algerian security forces failed in an attempt late Wednesday to storm the facility.”

“Defense Secretary Leon Panetta said the U.S. would take “necessary and proper steps” in the hostage situation, and didn’t rule out military action. He said the Algeria attack could represent a spillover from Mali.”

And it is military action, both covert and incrementally more overt, that will see the West’s extremist proxies and the West’s faux efforts to stem them, increasingly creep over the Mali-Algerian border, as the old imperial maps of Europe are redrawn right before our eyes. 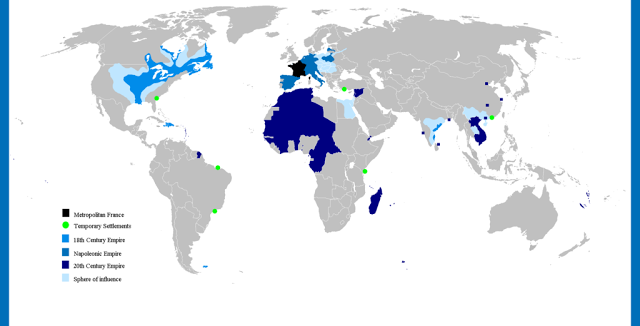 Image: The French Empire at its height right before the World Wars. The regions that are now Libya, Algeria, Mali, and the Ivory Coast all face reconquest by the French and Anglo-Americans, with French troops literally occupying the region and playing a pivotal role in installing Western-friendly client regimes. Also notice Syria too, was a French holding – now under attack by US-British-French funded, armed, and backed terrorists – the same terrorists allegedly being fought in Mali and now Algeria.
….

Meanwhile, these very same terrorist forces continue to receive funding, arms, covert military support, and diplomatic recognition in Syria, by NATO, and specifically the US and France who are both claiming to fight the “Free Syrian Army’s” ideological and very literal allies in North Africa.

In reality, Al Qaeda is allowing the US and France to intervene and interfere in Algeria, after attempts in 2011 to trigger political subversion was soundly defeated by the Algerian government. Al Qaeda is essentially both a casus belli and mercenary force, deployed by the West against targeted nations. It is clear that French operations seek to trigger armed conflict in Algeria as well as a possible Western military intervention there as well, with the Mali conflict serving only as a pretense.