A Sumerian clay tablet, over 5000 years old, showing what appears to be a multiple-section space rocket, located in underground silo.  There are thousands of pictures and textual references to space travel throughout Mesopotamian remains.

Beyond Uranus looms Saturn, a giant planet (nearly ten times Earth’s size) distinguished by its rings, which extend more than twice as far out as the planet’s diameter.  Armed with a tremendous gravitational pull and the mysterious rings, Saturn must have posed many dangers to the Nephilim and their spacecraft.

This may well explain (TAP – it doesn’t explicitly explain, Zechariah.  Are you not saying something you know or suspect here?) why they called the fourth planet TAR.GALLU (“the great destroyer”)……… 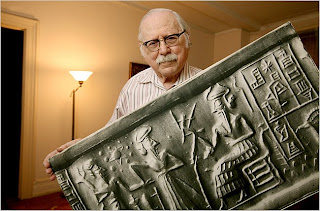 Zecariah Sitchin holding another informative Sumerian clay tablet replica.  How come the Sumerians knew all the planets 5000 years ago?  We only ‘discovered’ Uranus, Pluto and Neptune in the last two hundred years.  It’s when you hear lifetime researchers like Bergrun and Sitchin talking or writing the full details of their work that you might find it possible to start believing what they are saying.

A very early Sumerian text, assumed since its first publication in 1912 to be “an ancient magical text” very possibly records the loss of a spaceship and its fifty occupants.  It relates how Marduck rushed to his father with some terrible news –

“It has created like a weapon;  It has charged forward like death….The Annunaki who are fifty, it has smitten…The flying birdlike SHU.SAR it has smitten on the breast.”

The text does not identify “it” whatever destroyed SHU.SAR (the flying “supreme chaser”) and its fifty astronauts.  But fear of celestial danger was evident only in regard to Saturn.  The Nefilim (those coming down to earth) must have passed by Saturn and come in view of Jupiter with a great sense of relief.  They called the fifth planet (Jupiter) Barbaru (bright one) as well as SAG.ME.GAR (great one, where the space suits are fastened)… 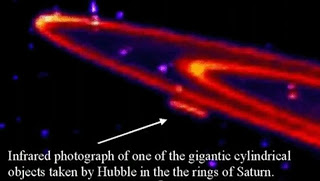 TAP – The Nefilim counted the solar system from 1-12 starting from the outside with Neptune as number one.  As they travelled from outside the system, that method was logical enough.

This section in the text interested me greatly.  After reading The Ringmakers Of Saturn and seeing that in all probably there are intelligent entities located there, as identifed by Norman Bergrun and others, it seemed strange that there was no mention of these in Sitchin’s books on the Anunnaki and their times on Planet Earth. 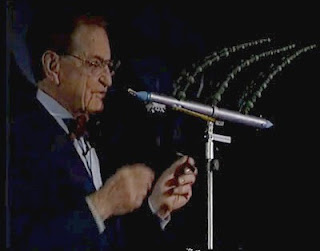 Norman Bergrun explaining a scale model of a Saturn Ringmaker, with streamers connected to long cylindrical body up to 30,000 miles long.  Never been in the Daily Mail, yet these ‘entities’ are clearly visible on NASA Voyager releases and on Hubble picture releases.  They don’t want people to know.

The ‘picture’ must be one of interplay between these two off-planet actors, if indeed they both exist.  They could hardly ignore each other.  Here is the first mention of a possible warlike situation between these two different groups of ‘entities’ – the ones who created and fostered humanity, the Anunnaki, and the Reptilians from Saturn, made famous by David Icke,  who are less favourable to the development of humanity.

Icke believes the Reptilians are now in the process of erecting a control system and depopulating us.

The Annunaki withdrew from earth a few thousand years ago, and account for many of the stories in The Old Testament, when maybe we were not seen as much of a threat by the Reptilians, with the technology of the Anunnaki being so far ahead of mankind’s.

If Icke is right about the situation, we are under threat not from deluded humans as we once believed, but from entities who have penetrated all our structures of control, like the media, politics and banking, and they are quietly eliminating as many of us as they can, from behind the curtain, by interbreeding with humanity.

It is peoples’ inability or refusal to see what is happening to them that makes them so vulnerable to such attack.  How else can you explain the fact that paedophiles run the world’s ‘child care homes’, and the legal system protects all of them, and all the things that being placed into the environment which are sterilising us, and shortening our lives, with chemtrails visible in the sky poisoning the very air we breathe on a daily basis, and the government doesn’t even mention them?

If these ancient records mean anything, the ‘entities’ so-called have been visiting and working on us a very long time.  It would be surprising if they weren’t now up to something to try and stop us from becoming a significant future competitor for resources around this section of the universe.  Politics, economics and warfare don’t begin and end on Planet Earth, you might say.

27 Responses to “50 astronauts shot down near Saturn”