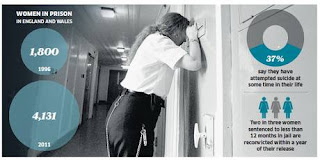 Close women’s prisons, says The Independent
Vicky Haigh is out of jail, where she was sent after a chance encounter with her adopted-by-state-force daughter, when she shouted to her.  This was adjudged a breach of a non-contact order.  She is now commenting about her time inside.

UPDATE –  ‘I saw an incredible amount of cruelty’.

I am glad the comments on your blog are supportive. I would like you to publish my letter of thanks to your followers which I wrote last year when I was an asylum seeker in Ireland to protect my baby Sapphire from the Nazi social workers.
I also want you to know of Baroness Corston who wrote a report on “Women In Prison”. I can tell you that her recommendations on sending women to prison and how they are treated when in there are not at all being abided by, by the system.
I saw an incredible amount of cruelty in there too, even seeing a Romanian young lady made to give birth to her baby in her cell, with no one to help her and the officers would not even open her door until the baby was virtually out. They then refused to take her to hospital and just wheeled her onto the Mother and Baby unit where I was with my baby.
This is barbaric, primitive treatment of the most vulnerable women in our society. I can tell you that I cried all morning when I saw her and heard what they had done to this young women. She came to trust me and told me it was like having a baby a hundred years ago.
Our country should be ashamed, our Government should hang their heads in shame and our children that have been snatched should BE GIVEN BACK. Sending love Vicky

UPDATE –  Baroness Corston states that women should only be imprisoned if they are violent and a threat to the public, which is the total opposite of me where my “crime” was to talk to my own daughter in a petrol station. I think that it is interesting for your followers to know that there are only two categories for women in prison, either “open” or “closed” conditions.

Men on the other hand have four categories ranging from the serious criminals down to the minor fraud ones who are obviously not a threat to the public. Therefore I was in prison with murderers and extremely violent women, when I had never had any previous conviction. I was eventually sent to “open” conditions, but was soon returned to closed when I did an interview with the Daily Mail stating that the police and social workers had failed to prosecute my ex husband for sexual abuse against his own child.
I was then almost prevented from being released on a tag by the outside agencies “MAPPA” due to my being deemed “a danger to the public”, but the prison saw sense to release me as I was not a candidate for prison in the first place. The mind boggles, it really does!!! Wishing this was all a dream, Vicky
SENT EARLIER –
Hi Tap
Hope you are well. There is a conference on Saturday about forced adoption. John Hemming MP has organised it. It is not for the wide public but you should go.
Most women in prison were victims of sexual abuse as children. The prison system knows this but the abusers are State employed ie social workers, police, teachers etc. That is what I meant by state run.
It was unbelievable what i saw in there.
I will be there saturday, if you want details let me know.
Regards
Vicky
TAP – tell us more, Vicky.  People would be very interested to know.
Hi Tap
Over 70 per cent of women in prisons are victims themselves of sexual and physical abuse as children. The prison officers told me they have at least one suicide attempt everyday.
I noticed that the womens sexuality was totally out of sync as they didn’t know what they really were. Most did not trust men and the majority were brought up in the care system. I met many foreign nationals whose children were taken for spurious reasons.
Now there are 500 per week snatched. Soon most families will have a child in care. This cannot go on, we will not allow it.
The Slovakian video on U tube is a must to watch.
Vicky

6 Responses to “Vicky Haigh – what goes on inside women’s jails is unbelievable.”