….and that’s before they mention Rebekah Brooks.  The story that’s trending is the Gordon Logan recent one about Murdoch blackmailing Cameron.   Traffic is coming in from Twitter.

COMMENT –
Telephone comment just came in from local reader.  BBC broadcast espionage drama last night at 9pm on BBC1, now on iPlayer, called Restless.  There’s a suicide arranged as with nurse Jacintha Saldana, which shows you how these nutters operate.  Well worth watching according to caller.

JULIA –  Cameron certainly got a lot of popular support as a result of his disabled son. It also helped swing people round to believe he would support the NHS. My Mum is always going on about his disabled son, and that seems to prove to her that he is a genuinely good man who has suffered hardship in his life so can therefore understand the people.

Another thing I notice is this proliferation of politicians who get into power having a baby. It’s almost as if it’s part of the job. So I suspect it is! Why is that then? Can they be blackmailed by their baby? Or is it set up to make them look like a family man? Or something else? It just happens too often to be coincidence.
Murdoch blackmails Cameron. Gordon Logan. 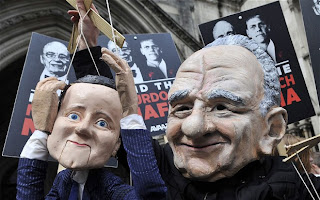 Hi TAP,
Merry Christmas to you and your family!
I’m sending an interesting snippet on Murdoch and Cameron from Gordon Duff. I’ve transcribed the most interesting part, relating to the murder of Cameron’s handicapped boy. It’s at the bottom.
This could finish Cameron if it gets round Westminster.
My text begins here:
David Cameron has turned out to be an unrepentant thug in the Blair mould. Libya and Syria
have both been wrecked by tens of thousands of brainwashed jihadist psychopaths shipped in from
prisons and mosques from all over the Middle East and even the UK.

Lord James puts the taxpayers’  money spent in the service of terrorism in the billions.

elderly taxpayers in NHS hospitals. The so-called ‘Liverpool Care Pathway’ was discovered a few
months ago. The term could have been invented by George Orwell himself.
It now turns out that Cameron and his wife murdered their own handicapped son.
Mossad super-spy  Rupert Murdoch recorded Cameron discussing the murder. This recording was used to
blackmail  Cameron into allowing Murdoch and his son to leave the UK without being arrested, while 47 News
Corp employees face prison sentences.
The suspicions that arose when Cameron’s close associate and
confidante, Christopher Shale, was found dead in a lavatory at the Glastonbury Festival, are further
confirmed. Shale may well have been Cameron’s interlocutor in the bugged Downing Street phone

call.
According to Gordon Duff, a major anti-zionist player in the US intelligence community,
Murdoch was even blackmailing MI6 to get secrets to sell to China. This wreaks of treason and
espionage, but in London, where Mossad’s writ runs larger than MI6’s, it is mere ‘phone hacking and
abuse of a news service’.
Lord Leveson, a ranking representative of Jewish organized crime, is put in
charge, and the Murdochs go home to Mossad. As for MI6, my good friend, Malcolm Rifkind, calls the
useful idiot John Sawers to the House of Commons to be questioned by Rifkind’s Intelligence and
Security Committee, where the UK’s Jewish scandals once again vanish down the memory hole.
In Washington, the neo-cons are on the skids, and Brzezinski is leading the charge against Kissinger. The
neo-con generals are being purged. When will the purge start in London? If the Jews can’t be put behind
bars, why should the 47 gentiles bother turning up in court? When will Rifkind and Leveson and all the
other traitors be shipped out to Tel Aviv? When will David Cameron (Levita) join Tony Blair (Lipsett) in
Jerusalem?
Transcript of Gordon Duff interviewed by Stew Webb in link below:
“How do we explain that Rupert Murdoch runs the most dangerous intelligence
organization in the world? […] of course in Britain you understand that 47 News Corp
employees are under arrest right now and they’re trying to spin this when you read the
news if you’re  blackmailing the head of an intelligence agency to get secrets to sell to
China, that is considered ‘phone hacking and abuse of a news service’. Now some of
the rest of us would see that as treason and espionage, but when you know all the
right people, and you belong to the right clubs and you have a Prime Minister in a
country that you were tapping his telephone, you learn that he and his wife had
murdered one of their own children who was significantly retarded […] That’s how Mr
Murdoch and his son have managed to stay free. They have a recording.”
The Tap Blog is a collective of like-minded researchers and writers who’ve joined forces to distribute information and voice opinions avoided by the world’s media.