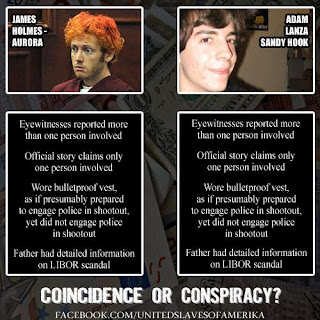 The father of Adam Lanza is Peter Lanza, a VP and Tax Director at GE Financial, one of the many corporations owned and controlled by the international central banks, and was also a partner at Ernst & Young. ¹ The father of James Holmes is Robert Holmes, and, at the time of the shooting, the lead fraud scientist for the credit score company FICO. ²

FICO works with all major banks and is directly connected to the function of London Inter-Bank Offered Rate, or LIBOR. I have read the claim, in both cases, that these men were actually slated to testify in the LIBOR hearings before the U.S. Congress, but I have not been able to find anything substantial or conclusive to prove that. Both men, however, it has been evidenced, were quite knowledgeable on the LIBOR interest rate fixing scandal, with at least the potentiality to be subpoenaed for testimony in hearings regarding the fraudulent scheme.

16 international central banks have been implicated in this ongoing scandal, accused of rigging contracts worth trillions of dollars. This is undoubtedly the largest financial fraud scheme within our collective lifetimes, and I would venture to say, in the history of the world.

If you think that the international banking mafia/cartel is not capable of murder, and it all sounds too impossible to believe that these incidents are more than coincidences, consider the case of Kevin Krim. Kevin was a CNBC executive responsible for publishing news of a $43 trillion lawsuit that implicated “top government officials in the Obama White House along with several major US banks, bankers involved in the wrongdoing, and their profiteering cronies.” ³

His family ended up murdered the day after with the mild-mannered, highly-praised nanny being blamed for the murders. If all of these situations sound more like coincidences rather than conspiracies to you, then it seems to me that you don’t know exactly how ruthless these crooks are. Suffice it to say, that to compare them to the mafia in terms of murderous ruthlessness could best be paralleled by respectively comparing the New York Yankees to a Little League team.

They literally persuade governments to start wars, so that they can finance both sides, and no matter who wins or loses, they are always winners, because they will always be receiving their interest payments at the end of any given conflict. You need look no further than to investigate who financed the Nazis to build them up into a power that would be dangerous enough to justify a second world war, which they desperately sought, in order to increase support for the establishment of the UN, with the overall goal being one world government, otherwise known as the New World Order. The Rockefellers, the Morgans, and even Prescott Bush, father of George HW Bush, are all implicated in being party to the international banking cartel, and, at best, indirect financiers of Hitler’s Nazi party.

Another factor of consideration is the fact that we have seen the most marked increase in “mass shootings,” and incidents billed as “mass shootings,” since the time that the UN small arms treaty has been being considered here in the US. Not only have these two incidents shown marked discrepancies between “official” accounts, the Sikh Temple shooting as well had eyewitness accounts of multiple suspects(four shooters with a paramilitary appearance, in this case), with the “official” story claiming that there was only one shooter.

9 Responses to “The Sandy Hook/LIBOR links”