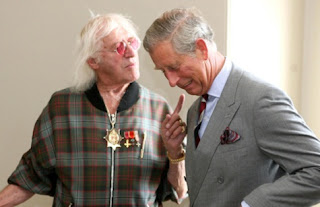 This comes as the Queen has kept silent about the recent child abuse scandal around former BBC star Jimmy Savile that is described as the worst crisis to hit the corporation in 50 years.
She has refused to comment on the subject despite the fact that the scandal is a moral issue of public interest and that she is directly involved in the matter: the BBC is run by 12 trustees appointed by the Queen in person while she granted Savile knighthood in 1990.
Indeed, Savile was knighted when his abuse was well underway and the Queen should have distanced herself and the royal family from the pedophile immediately after allegations of his pervert activities to ward off unwanted speculation.
However, there has been no comment by the Queen herself, her office or the royal family as if she knew of the Savile’s scandalous behaviour and decided to decorate him regardless.
As for the BBC, it runs under a Royal Charter, the present one having come into force in 2007 and running until the end of 2016.
The corporation is also ruled and supervised by the BBC Trust, which is a board of 21 trustees directly appointed by the Queen to set “the strategic objectives of the BBC” and chooses the broadcaster’s director general who heads its Executive Board in charge of its services and output.
The magnitude of the Savile scandal and the unfolding drama including comments by Tom Watson MP who openly suggested in parliament that there may be a pedophile ring going right to the British Prime Minister’s office at No 10 Downing Street raise more questions.
Is the Queen aware of the true scale of the scandal that is currently unknown to much of the public and even investigators and wants to keep herself out of any inquiries?
Or probably she is keeping a low profile to evade responsibility for knighting a former employee of an organization where its sovereign body members she directly appointed.
What is clear is that her silence remains problematic and begs more questions still less answers.

Today David Icke asks how the hell did Jimmy Savile end up running the Royal family, negotiating between Diana and Charles, advising Charles which officials to employ, ans socialising with them all.  He was knighted despite everyone in the entertainments business knowing him to be an active pedophile – or worse.  How did this all happen?

Savile receives his knighthood in 1996.
DON’T MISS:
– The Prince and the Pedophile: Charles’ connections to pedophilia networks
– Child molester Savile guided Prince Charles in choice of top aide– Prince Philip: Is this the sickest man in the UK?– The BBC is being shaken to its core by an enormous sex abuse scandal
The Tap Blog is a collective of like-minded researchers and writers who’ve joined forces to distribute information and voice opinions avoided by the world’s media.

13 Responses to “The Queen runs the BBC. Jimmy Savile ran the Royal family.”