Watch carefully.  What’s that in her hand? 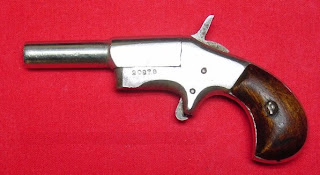 Why did she push him away in the seconds before the fatal shot?

What’s that she puts down behind the shot President?

Why did she climb onto the trunk?
It’s all explained in this excellent website. 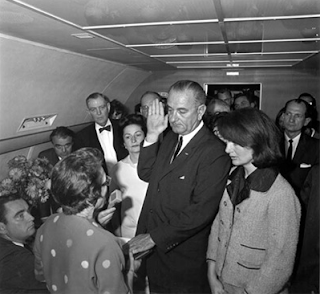 Later the same day, Johnson swears in as the new President
A little later that same day, 22nd November 1963, on board Air Force One, Johnson was sworn in as U.S. President in his home state of Texas, with a composed Jewess, Jacqueline Bouvier, faithfully by his left side and another Jewess (Johnson’s wife, Ladybug) on his right side.  She had just returned from a three month stay with Onassis.

In the three year period following the assassination many witnesses died – mostly of unnatural causes. Many rumors crawling around about the high death rate during these years. They are supported by the mostly suspicious circumstances the victims died under. For a unknown shooter or even shooters, all these deaths have on thing in common: they are very convenient to those assassins since these witnesses took their knowledge with them into the grave. But see yourself and decide whether these deaths are purely coincidently:

http://whatreallyhappened.com/RANCHO/POLITICS/JFK/deaths.html
This is what has happened to America since the events of that day, and has yet to happen……
The Tap Blog is a collective of like-minded researchers and writers who’ve joined forces to distribute information and voice opinions avoided by the world’s media.