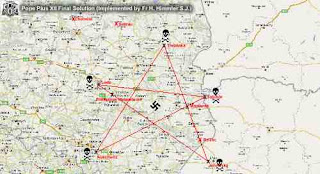 COMMENTS –
Anonymous said…
At anon above,

The ‘court Jew’ financiers Rothschilds et al, are just a smoke screen.
The Rothschilds have been ‘keepers’ – read investors – of Papel treasure since just after the Napolionic Wars.
I was sceptical at first, just because their power and wealth is so very well hidden.
They’ve been around for 2000 years, collecting gold and wealth and power along the way.

Bungener, L.L.F.: The Jesuits in France or The Priest and the Huguenot. London, 1859

Groves, H.C.: The Doctrines and Practices of the Jesuits. London, 1889

Lathbury, T.: The State of Popery and Jesuitism in England. London, 1838

Ridley, F.A.: The Jesuits: A Study in Counter-Revolution. London, 1938

Robertson, A.: The Roman Catholic Church in Italy. London, 1903

Seebohm, F.: The Epoch of the Protestant Reformation. London, 1877

wasp said…
I have told you this & given proof that this is so, Time & Time again.

Rothschilds are JESUITS, as are many of the top Jews (ASHKENAZI) viz. SMOMS.

THEY ARE THE JESUIT’S FALL GUYS.
A JESUIT’S ONLY, ALLEGIANCE IS TO THE BLACK POPE.

JESUITS DON’T WEALK AWAY FROM ANYTHING, LEAST OF ALL THEIR WEALTH.

POST
What power is above all nations and controls global finance and banking and pretty much everything else?
The Vatican, The Roman Church – ‘paganism baptised’.
“The Papacy is none other than the Ghost of the deceased Roman Empire, sitting crowned upon the grave thereof.”
Thomas Hobbes
The power of Rome is re-establishing the Holy Roman Empire, under the guise of the European Union – have a look at this article entitledThe Spirit Behind the Beast in a magazine called The Philadelphia Trumpet:
http://www.thetrumpet.com/article/10031.21336.149.0/europe/european-union/the-spirit-behind-the-beast
Here’s are a few extracts, from the above article:
“Today a few—admittedly still a very small handful—of commentators on the European scene, such as Peter Hitchens, see this reality. The EU is a behemoth built in particular by the Roman Catholic elites of Germany over decades of patient and painstaking imperial effort. It amounts to none other than a literal resurrection of the old Holy Roman Empire of the German Nation—and behind it is the same spiritthat empowered the Holy Roman Empire on six previous occasions!”
“Do you know what Italian Prime Minister Monti, Spain’s Prime Minister Mariano Rajoy, ECB head Mario Draghi, and EU Council President Herman van Rompuy all have in common, apart from being prominent leaders within today’s European Union? They all have the same Jesuit-educated mind in their approach to the eurocrisis. Their education was guided by that same spirit which sought over 4,000 years ago to garner central power over the nations under the influence of the ancient leader of Babylon, Nimrod.”
“European Council President Herman van Rompuy made an interesting observation when commenting on himself and his Jesuit-educated fellows all sharing high office in the European Union. During a keynote speech delivered at an EU conference in November 2011, he declared, “Today, Mario Draghi, Mario Monti and myself are all three alumni from the Jesuits. Back to basics.” “
Here’s a link to the entire speech by Van Rompuy:
http://www.consilium.europa.eu/uedocs/cms_data/docs/pressdata/en/ec/126136.pdf
So, what do we know of the Jesuits?  Have a read of this article on the EIPS website, entitled
The Jesuits and their Strategy to destroy Britain:
http://www.ianpaisley.org/article.asp?ArtKey=jesuits
Please note that the Jesuits (Society of Jesus) have been thrown out of more than 50 countries, since their inception in 1540.
“Go ye, then, into all the world and take possession of all lands in the name of the Pope. He who will not accept him as the Vicar of Jesus and his Vice-Regent on earth, let him be accursed and exterminated.”
Professor Arthur Noble
The following is the text of the Jesuit Extreme Oath of Induction as recorded in the Journals of the 62nd Congress, 3rd Session, of the United States Congressional Record (House Calendar No. 397, Report No. 1523, 15 February, 1913, pp. 3215-3216), from which it was subsequently torn out. The Oath is also quoted by Charles Didier in his book Subterranean Rome (New York, 1843), translated from the French original. Dr. Alberto Rivera, who escaped from the Jesuit Order in 1967, confirms that the induction ceremony and the text of the Jesuit Oath which he took were identical to what we have cited below:
http://www.ianpaisley.org/article.asp?ArtKey=jesuit
A final note:
“It is true, that a little philosophy inclineth man’s mind to atheism; but depth in philosophy bringeth men’s minds about to religion.”
Sir Francis Bacon
Christmas and New Years greetings, Tappers !
Scotty
6 attachments — Download all attachments   View all images   Share all images
The Tap Blog is a collective of like-minded researchers and writers who’ve joined forces to distribute information and voice opinions avoided by the world’s media.

21 Responses to “The Jesuits and their Strategy to destroy Britain”