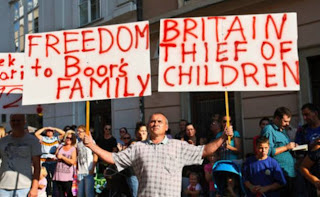 It’s the social workers who are racist, say Slovak parents in UKIP fostering scandal: The Mail reveals the truth behind Thought Police furore – and it’s more shocking than it seemed

The birth parents of the children at the centre of the UKIP fostering row can today be revealed as a Slovakian couple who have had six of their offspring taken away by social workers.

Last night the father accused council staff of ‘racism’ and of destroying his family as he told how  20 police officers ‘raided’ their home to remove their last four children.
The authorities have also taken the couple’s grandchild (the baby son of their 17-year-old married daughter), bringing the total number now being looked after by the state from this one family to seven. Their ages range from five months to 11 years.