there is a conspiracy right under our noses which no one seems to have pointed out, and thats all the little BOYS abused by jimmy savile.
these poor little souls get no menton at all
Chris Cooper
Also Ch sends – 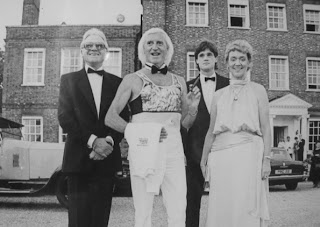 Questions have now been raised over the friendship between the committee’s chair, Mr Vaz and Champneys’ owner Mr Purdew.

Mr Purdew is also godfather to one of Mr Vaz’s children, who is the Leicester East MP.

Mr Vaz and Mr Purdew are understood to have been friends for more than 25-years and there is no suggestion of any wrongdoing. “

OUTSIDE CHAMPNEYS: Jimmy Savile with Dorothy Purdew and Stephen Purdew

Jimmy Savile was a regular visitor at Champneys health spa in Henlow, first visiting in the 1960s. He became a close friend of the owners, Stephen Purdew and his mother Dorothy. When a new bedroom wing was opened in 1985 it was named after him.

Stephen Purdew said: “He was a very significant family friend loved by everyone.

“Many people in the Henlow area will have very fond memories of this great man. My mother and I will miss him dearly.”