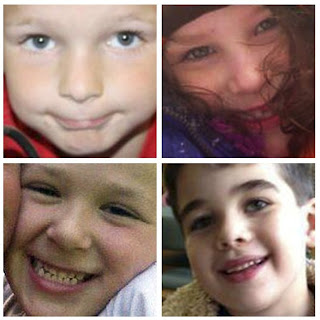 Jim Stone has investigated this incident and concluded that the children have been kidnapped.
http://www.jimstonefreelance.com/

Since the children really are missing, and few (if any) died in what is obviously a wag the dog, It is extremely likely that the children were stolen and sold on the slave market. They had to go somewhere, and the people who most likely perpetrated this wag run the biggest slave trade center in the world. It just fits. If you are not aware of the sex slave trade and that little tribe, you should get informed on that topic.

This is my best guess at why a separate “Sheriff” was sent to guard every single parent of every child afterwards. The Sheriffs are not likely to be real sheriffs, they are more likely paid goon actors, and with such child slaves selling for well over $200,000 a pop, it’s worth it to pay people to pose as sheriffs to give the first alert about any suspicions from parents.

IT JUST FITS. IF THE SHOOTER IS DEAD, WHY ARE THE “SHERIFFS” NEEDED to guard every set of parents? How could they spare THAT MANY SHERIFFS, 20 sets of parents x 8 hour shift = 60 sheriffs needed. SHERIFFS, AN ELECTED POSITION, AS IN, ONLY A FEW EXIST, NOT DEPUTIES.

HA, THAT WOULD EXPLAIN WHY NONE OF THE PARENTS HAVE BEEN ALLOWED TO SEE ANY BODIES. UP AND COMING – CLOSED (AND LOCKED) CASKET “FUNERALS” and UN IDENTIFIABLE CANS OF ASHES.

The disgusting “every single one was a head shot” B.S. would make that a rational possibility – head shot = closed casket or creamation, X 20. No body ever actually seen.
It’s a safe bet that any overly anxious parents will “commit suicide” or be vanished in silence.

I’ve just heard that the children may be the intended victims at this Satanic ceremony today:
http://newsdoors.blogspot.co.uk/2012/12/top-12-illuminati-banksters-meet-for.html

All I know is that the news version of this story is contrived.  When the story being given doesn’t add up, there has to be another explanation.  This idea of Jim Stone’s is a definite possibility.

Julia said…
This is quite spooky reading this. A few days ago, I came to exactly the same conclusion, but have not had a chance to write anything. The delay imposed on the parents seeing their kids was a bit f a giveaway. It reminds me of the Moonwalkers having to be in quarantine for 3 weekS after landing, so that the powers that be can control their minds, control the media release etc etc. They also managed to get a picture of every kid out pretty quick, like trophies, heads on a platter. Even if the parents did get to see the bodies, they could have put substitutes in by then. Hollywood is pretty skilled these days, so is Madame Tussauds.

I also saw a picture showing a US flag stuck in the ground for each dead child, like a conquest r victory, like when someone reaches the top of Everest, or captures enemy territory.

There is a plan of all the hurricane names for 2013, already planned! This kids massacre is Sandy. The last hurricane was Sandy. That gives me a clue that they will also have a list for all the massacres of 2013, planned in advance. Hurricanes and massacres are both on the increase.

I too had nagging suspicions about this shooting from the off. I initially surveyed the pages of images on Google of ‘parents’ on the scene. The school population is supposed to be 600 and they have photos of the same 80ish people over and over. Most disturbing was that many photos were of men leaving either in control of or carrying young children. Where were all the mothers? The two nuns who were photographed leaving were also never identified. Why were they there? Surely at such a time they would be giving comfort?

The obvious actors interviewed were the kindergarten teacher whose classroom was first by the entrance but she was able to recognise shooting and hide all her kids within seconds. The shooter bypassed her classroom leaving her safe for the cameras. The next Oscar performance was from the supposed parent of one of the dead children. Ditto for the family of the young teacher. Blah..blah…
Someone should have passed an onion round to get some water from those very dry eyes!

Vey bad feeling that most of those little lives were not lost to a shooter but something worse has happened to them.

The kidnapping hypotheses of the children from Sandy Hook primary
school will seem bizarre to many, yet in my opinion it is true.
Strange as it may seem.

In the early hours of the fifteenth December I
was awakened by a voice which said to me, “The children were a
sacrifice to Molech”.
Furthermore, I slept in that morning which is a
thing I very, very seldom do and when I looked at my digital clock it
was reading 9:11.
The Tap Blog is a collective of like-minded researchers and writers who’ve joined forces to distribute information and voice opinions avoided by the world’s media.