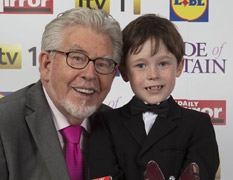 I didn’t cover the Rolf Harris caution, and his inclusion in the list of entertainer suspects.  He’s another entertainments industry sacrifice, no doubt selected to feed the media machine, to get the politicians and the Royals off the hook.

Bearing in mind that a police caution is a criminal disposal, is an admission of guilt, and is on the offender’s record.

What’s the provenance of this caution?

(Genuine inquiry – not a prurient bystander.)

I saw the word cautioned elsewhere, and have not checked it out.

That said he’s yet another Royal favorite..

As Bill Oddie said, everyone in the BBC knew Savile was ‘at it’.   Oddie believes Savile was untouchable as he was a ‘friend’ of the Royals.  In other words, the Royals set the standards which the BBC observed.

18 Responses to “Rolf Harris cautioned. Do we need Royalty any more?”