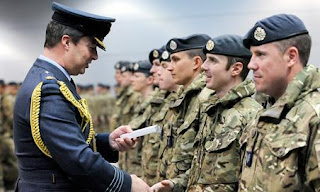 I see you allow arsoles on here tap

The RAF issue a handbook each of which has to be signed for and numbered, these are instructions for the chemtrailing duties.

My family has several members in the RAF and they say they are absolutely forbidden to speak of it.
A cyclng club in Bedford used to advertise chemtrail masks in the newsletter as CTmasks, they were pale green and impregnated
with various plant extracts
such as slipery elm which was said to assist breathing outdoors
hope that helps.