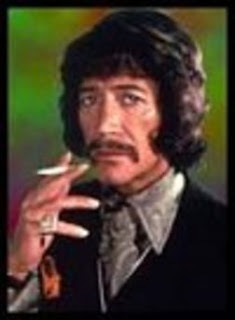 The BBC used to go mental having to phone the police station to say look Peter Wyngarde was one of their top TV stars and could his latest arrest in a public toilet be overlooked, but Wyngarde,  real name (Cyril Louis Goldbert ) would be constantly at it with young lads, he had a bit of an entourage of rent boys that onlya top star could afford.
Peter Wyngardes mad album When Sex Leers Its Inquisitive Head was originally commissioned by RCA to cash in on his popularity, it was released and quickly withdrawn a week later.  Presumably nobody had actually listened to it prior to its release.  Instead of the requested set of easy listening tunes, Wyngarde delivered a series of wild, pervy spoken word rants, backed by wild free-form noise jazz, tribal drums, lustful moaning, and shouts of exultation.
It’s practically impossible to describe the myriad fragments sufficiently, and it boggles the mind to think of how this got made in the first place.  One of a kind, for sure, but its become the record for gay parties and rent boy fests.
In 1975, he was arrested and convicted for an act of “gross indecency” in the toilets of Gloucester Bus Station, which followed an arrest and caution for similar activities in the toilets at Kennedy Gardens in Birmingham the previous year,
and several warnings brushed off by the BBC. After the first incident, Wyngarde was interviewed for the News of the World and the Birmingham-based Sunday Mercury, and asserted that the arrest was due to a misunderstanding; in his defence after the second incident he claimed he had suffered a “mental aberration”. Although it affected his image, particularly with his audience who largely identified him as ladies’ man Jason King, Wyngarde’s homosexuality was actually well known in acting circles, where he was known by the nickname of “Petunia Winegum”. From 1956, he had a stormy on-off ten-year-long relationship with fellow actor Alan Bates
After losing his TV celebrity status, and squanderinga smal fortune on alcohol and bumboys, Wyngarde worked in Austria, acting and directing at the English Theatre in Vienna, and also in South Africa and Germany. He landed the role of General Klytus in the 1980 film version of Flash Gordon, though his face was hidden behind a mask for the part. His distinctive voice is clearly recognisable in the film, I remember a rather glitzy bisexual couple (I won’t say names, but they were well known on the ‘alternative’ scene in Nottingham at the time) who were usually in the Flying Horse on Saturday nights. They would often have a party at their house after the pub or even after the clubs once they had started business. They would particularly do this if a TV or stage star was in the Flying Horse bar and would invite him (invariably a him) back. I remember great excitement and a clamour for invitations to this couple’s  when Peter Wyngarde (TV’s Jason King) was in the Fly. The couple would also pick up a rent boy for their joint sexual pleasure. It was in connection with this couple that I first began to hear of drug use among fringes of the homosexual scene. I remember trying cannabis once with a boyfriend I met in the flying Horse, and was given poppers once by another boyfriend at the time, but that is all I  saw personally.
There were loads of rent boys, often the dolly boys on scooter types, there were wealthy gay business men up from London looking for pretty boys to take to smart restaurants and be repaid by a nobbing in their hotel room.
In those days a phone call from a BBC director would get you off parking charges or being caught out with bum-boys,
but i am told it does not happen today.
The Tap Blog is a collective of like-minded researchers and writers who’ve joined forces to distribute information and voice opinions avoided by the world’s media.