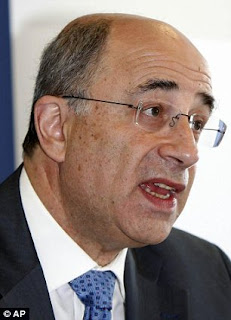 Funny how Leveson happened to be addressing a Sydney conference on privacy and the internet just 3 days after the Australian DJ prank call.
He actually flew business class with his wife on Dec 4th. Date of the prank call.

TAP – There’s no point in Leveson obliterating the freedom of the press in Britain, unless they do the same in all other countries at the same time, and they nobble the internet too.  That’s why they need a global news story that justifies the actions they want to take.  They set up the Royal hoax drama that was then used as the reason for the ‘suicide’ which was in all probability a murder.

Lord Justice Leveson is to take an all-expenses-paid trip to Australia to give a £620-a-ticket lecture on controlling the media – days after passing his judgement on the future of press regulation.
The High Court judge will make the 10,000-mile haul with his wife to give a key note speech at Sydney’s University of Technology entitled ‘Privacy in the 21st century’ on December 7.
He will make the address just eight days after the official publication, on November 29, of the first part of his long-awaited report from his epic probe into press standards and amid the likely firestorm that will ensue its publication.
The inquiry has heard months of evidence – some explosive – from key figures including celebrities, lawyers, politicians and journalists.
Details of the trip – and of the report’s publication – emerged a day after Mayor of London Boris Johnson warned MPs against jettisoning centuries of British freedom by shackling the Press as a senior Cabinet minister openly mocked the inquiry into media standards.
Described in publicity as the ‘Chair of the UK Leveson Inquiry’, Lord Justice Leveson will be among a host of experts to speak at the day-long symposium, billed as ‘one of the key privacy events of the year’, according The Times.
He will then jet to Melbourne five days later to deliver a second oration on ‘News Gathering in a Time of Change’. Tickets for this event, which are free so long as audience members book in advance, have already sold out.
Margaret Simons, director of Melbourne University’s Centre for Advanced Journalism, which is hosting the December 12 event, says in the release: ‘Sir Brian’s lecture will raise issues that must be at the heart of any discussion about the way journalists go about their work: how do we protect the vital role that journalists have in our liberal democracies and, at the same time, hold them to account for the ways in which they do their work?’