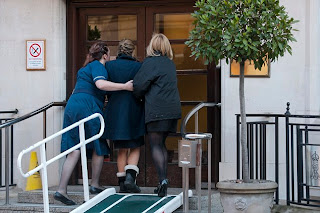 distraught nurses after hearing of their colleague’s death

UPDATE –  Was the nurse given a Royal telling off?  Why did she have to take calls anyway?   It’s all just beyond belief.   The Independent wrote earlier –
Prince William and the Duchess of Cambridge were reported to be angry at the intrusion
TAP – maybe it’s time one tried not to take oneself so seriously.

WASP –  I have just arrived back from an important mission, (I had run out of Beer),requiring the negotiation of several Traffic Jams, at which point I will inform you Lidl’s Shepherds Neame Christmas Specials. 99p/Bottle.

On checking what new stuff is in the papers I saw this.

Nurse on the switchboard found dead 2 days after revealing information
about Kate’s condition to DJs from Aus. Sounds mighty suspicious to
me. What did she reveal? Mmm, the mind boggles. Could this be a
warning to the DJs that if they blow the whistle they’ll get the same.
http://www.thetimes.co.uk/tto/news/uk/article3624316.ece

TAP – Did she arrange the call with the Aussie radio station and set up the call?  Was she regarded as a risk that might reveal something else to the media about the patient’s treatment?  Would a mature trained nurse commit suicide over putting through a call by chance?  Would such a person commit suicide at all?  Why did she die in the street?

TAP – Is it normal to go to hospital so early in a pregnancy?  Is there more to this?  The transhuman agenda involving genetic manipulation would no doubt be applied to Royals amongst others of the elite.  They plan to live for up to five hundred years.

Girls can now succeed to the throne  –  David Icke