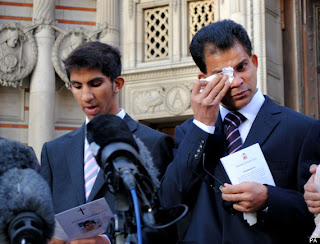 1) why would a devout catholic commit suicide and send her soul to damnation and bring such shame to her beloved family?

2) Why would a nurse who worked in life and death situations be so shaken by a prank call as to kill herself.

3) Why were there bruises on her wrists. Could this not be an indication of being restrained?

3) Why were the 3 separate “suicide” notes discovered days after the body? Would she not leave them in immediate view to be discovered?

4) Why has only a mention of her criticism of the hospital been given out to the public what other important information do they contain?

5)Why have the family only been given a transcript of each letter and not the originals. What proof is there that the letters were written by Jacintha Saldanha?


6) How were the police able to give the statement that there “were no suspicious circumstances” to her death at the same time the death was made public. What proof do they have?

7) None of her family, friends or workmates had any indication that she was suicidal. Why would this christian woman kill herself and abandon her beloved family at the most important time of year in the christian calendar?

14 Responses to “Jacintha Saldanha did not kill herself”