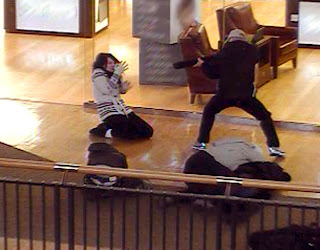 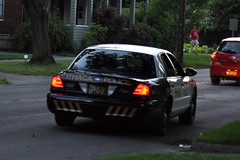 IPD (Photo credit: mhaithaca)
ITHACA — It is one of those ironies which seem to abound. The Ithaca Police Department finished training for handling situations like a school gunman on the day 20 children and 6 adults were killed by a gunman at  Sandy Hook Elementary school.
Saying SWAT teams are no longer adequate to respond to time when police must encounter a gunman in a building, an IPD spokesman said officers were trained during a six-week Law Enforcement Active Shooter Response between Nov. 5 and December 14.
After five officers were trained in how to respond to an active shooter, a vacant City of Ithaca building was used to train other IPD officers. Along with classroom instruction, officers were taught tactics and equipment for “force on force encounters.” Among the tactics learned: room entry, stairwell clearing, hallway movement and mental preparation. The training is in response to “the continual recent tragedies involving senseless acts of violence towards large groups of people in schools, malls and other public places,” according to the department.
“The mindset on police response to an active shooter incidents has changed in the last 15 years, most notably since the school shooting in Columbine, Colorado. The past approach was to wait for the SWAT Team to arrive and handle the situation,” according to Ithaca police. Noting SWAT teams “usually takes valuable time” in which victim are left at risk, the new game plan for police has evolved.
“The approach has evolved into training every officer to respond to the scene of any active shooter incident, locate any person actively attempting to hurt or kill innocent people, and stopping that person as soon as possible.”

Sent in by Anthony Price

One Response to “Another Sandy Hook coincidence”