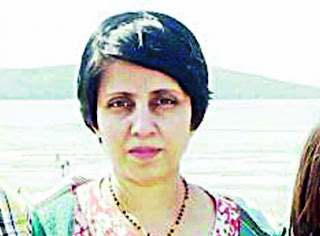 The picture of Jacintha Saldanha not deceased according to the Deccan Chronicle
Mangalore: “To all the wonderful people across the globe, I am very much alive! Though every local news channel & community website declared OTHERWISE !!! Boundaries Between news & entertainment is so blurred !
Thanks & God bless you all for your concern,” was the message pos­ted by Jacintha Sald­anha of Mangalore in her Facebook account after a section of the media flashed her photo mistaking her for Jacintha Saldanha of Shirve, the nurse who was found dead in Lon­don, after a prank played on her by an Australian radio station.
If the Australian radio presenters created havoc in nurse Jacintha’s life, the media here got it wrong because of identical names! 53-year-old Jacin­­tha hails from Kinnigoli village and stays in Mangalore.
Jacintha, a nurse at King George VII hospital in London, who hailed from Shirva in Udupi district, died on Friday. The problems beg­an for Jacintha of Kinn­agoli after news of her ‘death’ spread in the media on Saturday.
“I got a phone call from my cousin in Canada on Saturday saying my photo was being flashed in the media. When I switched on the TV, I  found several TV channels showing my picture. I found many messages in my Facebook account too. I received about 200-300 phonecalls from India and abroad asking what was happening,” she said.
“I spoke to some  mediapersons and asked them to issue a clarification. But that did not stop newspapers from carrying my picture and so I decided to approach the police. I want these media organizations to tender an apology failing which I’ll have to adopt legal means,” she said.

TAP – This is really very confusing.  The same children appear to be in the picture of the woman claimed not to be the correct Jacintha Saldanha by the Deccan Chronicle, as appear with the grieving partner of Jacintha in London, holding her picture.

Here’s the picture used by the media in London and around the globe, as well as the one used by the Deccan Chronicle (but without the kids showing). 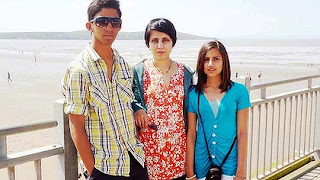 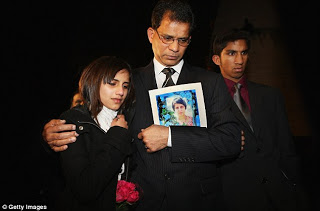 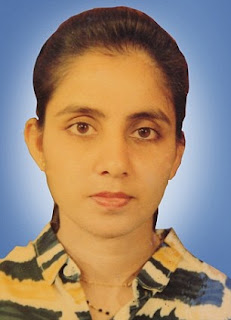 This is presumably a younger Jacintha Saldanha, deceased.  From Daily Mail.  Her age is reported as 46.
Here’s the picture that was initially circulated by the media of  (presumably) the wrong Jacintha. 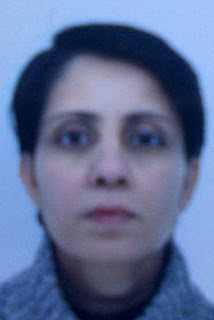 The earlier Tap Blog post on this topic was pulled.  I had wrongly assumed the Deccan Chronicle report and picture were correct.  I suppose main media are so time-pressured to get a picture out that they grab whatever they can get, and no one really looks that hard at who’s who anyway.  It would be good to see a correct picture of the alive Jacintha Sadanha from the Deccan Chronicle story, and the trouble would be sorted out.  Thanks to the commenters who spotted the flaw in my approach.  This looks like double media cock-up, and is very confusing. 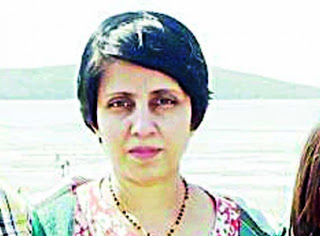 The two Jacinthas are close in looks, it has to be said, but they do seem to be different people in my opinion.
What do you think?
Is the Deccan Chronicle story a fabrication to throw people off the scent of the murder of the nurse, as one commenter implied?
Aangirfan –  Nurse died by hanging.

People at work saying how surely she couldn’t have committed suicide just from a prank phone call. My ears pricked up! Then they said oh she must have been mentally unstable!! Aaaaagh.
A few observations. She lived in Bristol, so why was she working in London? Rumour that she might have been a locum. But surely all nurses tending the Royal embryo would be heavily vetted? Why was a nurse answering the phone? Surely the whole area would be sealed off for private use, and security people would be vetting everything? Reminds me of the security “lapse” for JFK’s assassination. Or maybe the security people handed the phone to her, so she assumed it was ok?
COMMENT on David Icke –

Strange. One of the news channels (Sky or BBC, cannot remember which one I was watching) said earlier that she had been dead for a while (when they found her)

CBS reported ‘unresponsive or not breathing’ when found. 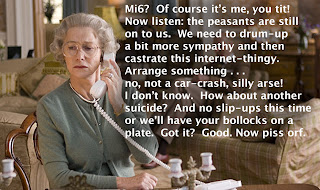 Sent in by Gary

TAP – They are laying a trail of multiple confusion, a smokescreen, hiding the fact that the nurse was murdered.  They don’t want anybody getting hold of that notion, and prefer people to abandon analysis of the story, put off by the difficulty of establishing any facts.  They’re learning from their earlier fiascos like the London tube bombing.

Fact is, the incident is being used by the Leveson contingent to propose shackling of the media and the internet.  That’s what this is all about.

Andy from Weston said…
Just to confirm. The first two (same original photo) pictures in this post were almost certainly taken on Weston-Super-Mare pier looking south-west towards Brean Down. So unless Jacin­­tha from Kinnigoli has been to Somerset in the not-too-distant-past it would definitely appear that the Deccan Chronicle has used the wrong image!
The Tap Blog is a collective of like-minded researchers and writers who’ve joined forces to distribute information and voice opinions avoided by the world’s media.