by Zen Gardner
The aerosol spraying of ours and many other nations’ skies continues in ‘plane’ site. The picture above of the US Northeast leading up to the so-called Frankenstorm is a perfect example. Tell me those are regular jet routes, never mind contrails.
Ridiculous.
Watch your skies for yourself, or search “chemtrails” if this is news to you. Jets have never spewed emissions that hang over the skies for hours, unless doing some air show stunt or are low-flying small planes spraying crops. Even then the trails will dissipate far sooner than these concoctions designed to do just what they do–hang and spread out–poisoning the air we breathe and the animal and plant life of earth, and polluting our oceans, lakes, rivers and drinking water. (Go to CaliforniaSkyWatch.com for some serious documentation.)

The degree of silence and cover-up of this toxic spraying is Orwellian. The most stunning aspect of this phenomenon, besides the absence of admission by any authority, is the lack of media coverage of such an obvious and intrusive phenomenon. While in some ways that is sadly not surprising in today’s clamp-down state controlled media, the idea that someone is purposely poisoning the very air we breathe on such a massive scale is harrowing.
Couple this massive spraying with the campaign for “clean air” and the emissions crack down on the victim citizens below, (even the life giving CO2 we emit!) and you have cognitive dissonance at its best. The two ideas are so contradictory the average citizen gives up trying to reconcile the two and goes into a state of rationalization. This translates into enforced acceptance of the status quo or phenomena being introduced which eventually puts them into a docile state of controlled apathy. It’s a known method of scientific social and cultural manipulation, and it’s used at every level of public information. Make war, get peace prize. Promise transparency, everything hidden. No lobbyists, all lobbyists. Global warming, planet cooling. Preserve freedom by more control. Save nations by destroying them..etc. etc.

It’s conditioning, and we’ve been getting hit harder and harder with it, especially over the past 2 generations as the modern media machine gained its grip. Hitler conveyed a similar, simpler precept for crowd control–tell a big enough lie and people will believe it. People just can’t bring themselves to believe anyone could be so manipulative, so inhuman, especially their so-called “elected” government, as to perpetrate such horrific things on their own people.

Read some real history. Oligarchs and rulers have routinely used their people to their own ends, or their handlers’ ends, not ours. They just try to keep us sedated, distracted and thinking we’re happy so we don’t wake up, revolt, and throw them out.
‘Are you telling me countries would carry out dangerous clandestine experiments on their own citizens?’
See for yourself.

The Sordid History of US Experimentation–On Its Own People

After World War I, the United States went on a chemical weapons binge, producing millions of barrels of mustard gas and Lewisite. Thousands of US troops were exposed to these chemical agents in order to “test the efficacy of gas masks and protective clothing”. The Veterans Administration refused to honor disability claims from victims of such experiments. The Army also deployed mustard gas against anti-US protesters in Puerto Rico and the Philippines in the 1920s and 1930s.
In 1931, Dr. Cornelius Rhoads, then under contract with the Rockefeller Institute for Medical Investigations, initiated his horrific Puerto Rico Cancer Experiments, infecting dozens of unwitting subjects with cancer cells. At least thirteen of his victims died as a result. Rhoads went on to head of the US Army Biological Weapons division and to serve on the Atomic Energy Commission, where he oversaw radiation experiments on thousands of US citizens. In memos to the Department of Defense, Rhoads expressed his opinion that Puerto Rican dissidents could be “eradicated” with the judicious use of germ bombs.

In 1942, US Army and Navy doctors infected 400 prisoners in Chicago with malaria in experiments designed to get “a profile of the disease and develop a treatment for it.” Most of the inmates were black and none was informed of the risks of the experiment. Nazi doctors on trial at Nuremberg cited the Chicago malaria experiments as part of their defense.
At the close of World War II, the US Army put on its payroll, Dr. Shiro Ishii, the head of the Imperial Army of Japan’s bio-warfare unit. Dr. Ishii had deployed a wide range of biological and chemical agents against Chinese and Allied troops. He also operated a large research center in Manchuria, where he conducted bio-weapons experiments on Chinese, Russian and American prisoners of war. Ishii infected prisoners with tetanus; gave them typhoid-laced tomatoes; developed plague-infected fleas; infected women with syphilis; performed dissections on live prisoners; and exploded germ bombs over dozens of men tied to stakes. In a deal hatched by Gen. Douglas MacArthur, Ishii turned over more than 10,000 pages of his “research findings” to the US Army, avoided prosecution for war crimes and was invited to lecture at Ft. Detrick, the US Army bio-weapons center in Frederick, Maryland.

That’s just for starters, folks. There’s a littany of atrocities that were uncovered in FOI documents. Here’s a few more:

From 1950 through 1953, the US Army released chemical clouds over six US and Canadian cities. The tests were designed to test dispersal patterns of chemical weapons. Army records noted that the compounds used over Winnipeg, Canada, where there were numerous reports of respiratory illnesses, involved cadmium, a highly toxic chemical. 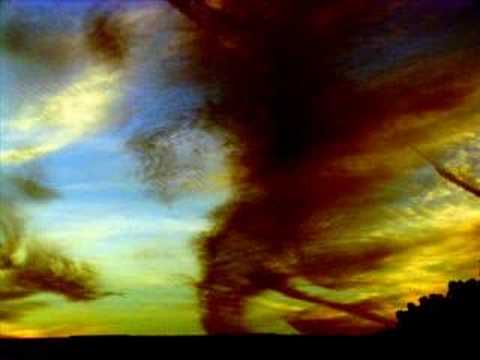 In 1951 the US Army secretly contaminated the Norfolk Naval Supply Center in Virginia with infectious bacteria. One type was chosen because blacks were believed to be more susceptible than whites. A similar experiment was undertaken later that year at Washington, DC’s National Airport. The bacteria was later linked to food and blood poisoning and respiratory problems.
Savannah, Georgia and Avon Park, Florida were the targets of repeated Army bio-weapons experiments in 1956 and 1957. Army CBW researchers released millions of mosquitoes on the two towns in order to test the ability of insects to carry and deliver yellow fever and dengue fever. Hundreds of residents fell ill, suffering from fevers, respiratory distress, stillbirths, encephalitis and typhoid. Army researchers disguised themselves as public health workers in order photograph and test the victims. Several deaths were reported.
In 1965 the US Army and the Dow Chemical Company injected dioxin into 70 prisoners (most of them black) at the Holmesburg State Prison in Pennsylvania. The prisoners developed severe lesions which went untreated for seven months. A year later, the US Army set about the most ambitious chemical warfare operation in history. 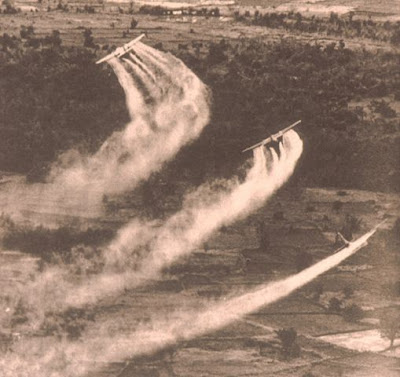 From 1966 to 1972, the United States dumped more than 12 million gallons of Agent Orange (a dioxin-powered herbicide) over about 4.5 million acres of South Vietnam, Laos and Cambodia. The government of Vietnam estimate the civilian casualties from Agent Orange at more than 500,000. The legacy continues with high levels of birth defects in areas that were saturated with the chemical. Tens of thousands of US soldiers were also the victims of Agent Orange. (read more hideous examples here)

No, we’re not the only country to commit such hideous crimes. In the UK it’s the same:

The Guardian: The Ministry of Defence turned large parts of the country into a giant laboratory to conduct a series of secret germ warfare tests on the public.
A government report just released provides for the first time a comprehensive official history of Britain’s biological weapons trials between 1940 and 1979.
Many of these tests involved releasing potentially dangerous chemicals and micro-organisms over vast swaths of the population without the public being told.
While details of some secret trials have emerged in recent years, the 60-page report reveals new information about more than 100 covert experiments.  UK Guardian

Back to the Current Chemtrail ‘Experiments’

(Germans are being sprayed as well and are also upset. Many countries are reporting the same phenomenon. It’s no longer if they’re doing it, it’s WHY?)

Even stranger is the now open admission of PLANNED aerosol programs under the name of “geoengineering” of exactly the nature that we’ve been experiencing in our skies as far back as 1995! This is similar to the “discoveries” of “new technologies” that have been available and used in covert projects in the military for years, such as lasers and microwave and infrared technologies to name just a few. By the time we hear about it it’s well under control and either deployed or surpassed by a newer technology. This parallels the Orwellian introduction of known poisons into our food supply such as fluoride, aspartame, msg and genetically modified foods, only to “find out” later, once it’s taken hold and they’ve made their money, “Ooops, our bad. It’s toxic, we’ll stop. But wait–we have some wonderful new chemicals to sell you..”
Chemtrails have been found to contain:

Barium, Aluminum Oxide, Titanium, Magnesium, and BannEthylene dibromide (dibromethane) or EDB are the essential elements of the chemtrail. [Nano particles, dessicated human blood cells, bacteria, fungi and other toxic substances have also been detected.]
Aerosol Barium salts were sprayed from planes over Panama, Libya, and during Desert Storm to make people sick and weak. Barium poisoning is worse than lead poisoning. The lungs are affected adversely. Many complaints of colds, flu, even pneumonia occur within a very few days after heavy chemtrail spraying over an area.
Aluminum causes extreme neurological disorders. Dementia, uncontrollable spasms, Alzheimer’s, and Parkinson’s Disease can be caused by long term aluminum exposure. Breathing in those particulates over time is a definite long term hazard.
EDB or dibromethane was banned in the USA years ago from use in all auto and jet fuels. But somehow it is appearing again in samples from chemtrail residue. It is a major component of insecticides, which are nerve poisons. It affects the nervous system especially where breathing is involved. And it is very carcinogenic. (Source)

Where’s the Media In All This?

You won’t see many mainstream media reports on chemtrails or the aerosol program, people are afraid to touch the subject. On the ground most people have become so Pavlovian that they can’t even acknowledge anything that hasn’t been formally introduced into the group consciousness. But now that people are beginning to wake up to this atrocity, they’re beginning to disclose a plan to supposedly counteract the global warming emergency with a geoengineering project–or however they couch this program- to suit the current mindset and pretend it was for our “good”.
I’ve written the EPA, the Weather Channel, contacted local officials, and there’s no official acknowledgement whatsoever. A friend called one of the California high desert airbases after watching her skies turn white with trails and one jet in particular was doing “doughnuts” over and over leaving a thick plume of this toxic slurry in circles. The officer’s answer? “You’re crazy lady, there’s nothing going on up there.” The jet immediately left the area.

Will anyone disclose the truth and call for a halt to this insanity and a full, real investigation?
I would hope so, but the clampdown is so pervasive it’s tantamount to getting 9/11 Truth on the mainstream news.
Let’s at least do our part and alert anyone and everyone we can.
It took pointing them out to awaken me, how about you?
Much love, Zen

TAP – Try this cure all to get the crap out of your lungs.

7 Responses to “Why are there so many coughs and colds this winter?”