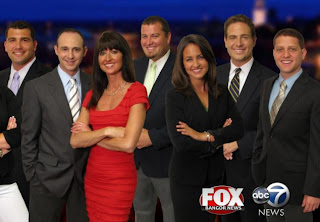 By JG Vibes
theintelhub.com
November 23, 2012
Two news anchors in Bangor, Maine quit their jobs on the air this week, after becoming frustrated with management over the course of many years.  The reporters also complained of being forced to put forward “unbalanced” political information.
According to Bangor Daily News:

“News co-anchors Cindy Michaels and Tony Consiglio announced their resignations at the end of Tuesday’s 6 p.m. newscast.
Michaels and Consiglio, who have a combined 12½ years’ service at WVII (Channel 7) and sister station WFVX (Channel 22), shocked staff members and viewers with their joint resignations Tuesday evening.”

The news anchors decided not to tell anyone about their departure before making the announcement on the air because they feared that management would not allow them to say goodbye to the audience after they resigned.
Michaels explained to the local newspaper one of the main reasons for their frustration, saying that:

“It’s a culmination of ongoing occurrences that took place the last several years and basically involved upper management practices that we both strongly disagreed with,” she explained. “It’s a little complicated, but we were expected to do somewhat unbalanced news, politically, in general.”

“There was a constant disrespecting and belittling of staff and we both felt there was a lack of knowledge from ownership and upper management in running a newsroom to the extent that I was not allowed to structure and direct them professionally,” Michaels explained. “I couldn’t do everything I wanted to as a news director. There was a regular undoing of decisions.”

Both of them also said that they had very little freedom in the issues that they covered and that they were forced to present controversial information from a propagandized perspective.  This definitely speaks to the immense amount of control that comes from the top down in the media, which is the reason why only one version of reality is presented through mainstream sources.
For these massive corporations that run the media to actually control the political and philosophical dialogue they are dependent upon the talking heads to make the sales.  At the end of the day, most of the talking heads throughout the world are just average people, at least at local stations anyway.  These human beings have the ability to withdraw support whenever they choose to.
Especially now with the internet, any one of these local news anchors that quit still have the ability to do the exact same thing they were doing before, but less restricted, on the internet.  These particular news anchors have expressed taking different directions in their lives, writing novels, or working in the media in other ways.  It would be great to see more people from the media, even on a local level withdraw their support in this kind of way.
These newscasters, and many others who are still in the field will agree that what is on television is not the news, it is a propagandized version of events that is crafted by the corporations that advertise on the station and the government that regulates the airwaves.
VIDEO –

TAP – a bit too perfect in delivery style although the body language carried the emotion, and I liked the hug at the end.  They no doubt feared being cut off while speaking.