Your blogg has gone ape 5h17

the truth hurts those that know:-

company of children at Haut La Garenne on Jersey? 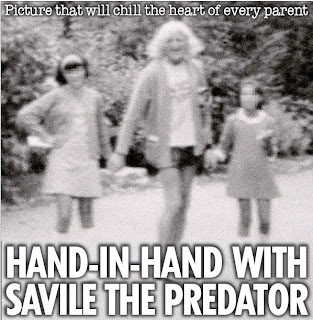 I thought nothing of it. I just saw Jimmy Savile and thought I’d take a photo for the album. But looking back now, seeing him with two little kids, walking down the road like that – it gives me horrible thoughts

JIMMY Savile leads two young girls down a quiet lane in a photo that will send shivers down the spine of every parent in Britain.

And the serial paedophile grins as he holds on tightly to the youngsters to take them for a private walk.

The chilling snap was taken near a notorious Jersey care home where the shamed star allegedly abused vulnerable kids.

They were pictured on a seaside lane near a sweet shop tourists said Savile often visited with young children.

Holidaying Kenneth Clark took it after seeing the Top Of The Pops host in the 1970s.

Now he fears he may have captured the sex beast during his 40 years of abuse.

He said: “I thought nothing of it. I just saw Jimmy Savile and thought I’d take a photo for the album. But looking back now, seeing him with two little kids, walking down the road like that – it gives me horrible thoughts.”

Kenneth saw Savile twice more that week. He said: “Each time he was with children. There were no adults there.”

The image was taken near the Haut de la Garenne care home, where in 2008 police uncovered decades of child abuse.

And last week a man claimed he was assaulted there as a 10-year-old by Savile.

Ex-police officer Lenny Harper, who led a three-year probe into the claims at the home, said he had “no reason to doubt” the Jim’ll Fix It Star was involved.

The picture emerged as four former TOTP staff were accused of being in Savile’s child sex ring.

The men – not presenters – are said to have plucked girls from the audience for abuse at vile sex parties, claimed callers to The National Association For People Abused In Childhood.

And yesterday Radio 2 host Jeremy Vine voiced his disgust that the dead DJ had apparently abused kids at the BBC.

The former Newsnight anchor, 47, called him “one of the most serious predatory paedophiles in criminal history”, adding: “I cannot believe it happened for such a sustained period, and on our doorstep.”

Posted by Tapestry at 9:25 PM No comments:

The story from the Daily Star must be about another Kenneth Clark – not the Ken Clarke.
4:34 AM

6 Responses to “The wrong Ken Clark(e)”