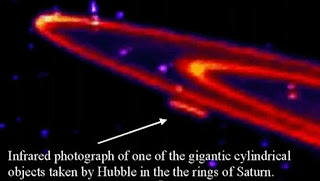 The same phenomenon captured by Hubble.
They don’t show this stuff on TV.  Why not?

If ever a book can change your view of the world we live in, The Ringmakers of Saturn by Norman Bergrun is it.  Saturn’s rings have fascinated astronomers over centuries, yet recorded observations have shown too much variability to build much of a picture of what they are made of.  The variability was always explained by the poor quality of observational equipment in earlier times.

The passing of Voyager 1 and 2 in the 1980s ended any such thoughts.  The two vehicles passed over nine months apart, and in that time, changes were observed.  The rings are created by ‘bodies’, being exhausts from emv’s (electro-magnetic vehicles), which are in the range of 20,000 miles long and 2,000 miles across.

That sounds nuts, doesn’t it.  It does sound nuts until you look at the pictures.  I indicated my interest in seeing the book, and a commenter kindly dropped off a URL of the book.  I’ve read the first third of it.  The craft are from life forms that are more technically advanced than humankind by a very wide margin.

There is far more to the story of Saturn and how it affects our lives on earth, but a good starting point is to take a look at the pictures in the book, and read the text, as well as watching Norman Bergrun on Project Camelot or Youtube.

Anyone would be sceptical when encountering this material for the first time.

To get yourself into the right frame of mind for looking at what amounts to paranormal information, this video describes events that would also challenge belief.  There is far more to things than we know, and we won’t understand the world we live in, until we get closer to understanding things that are currently kept beyond us.  Bergrun survived attempts on his life prior to is writing his book.

10 Responses to “The Ringmakers Of Saturn”