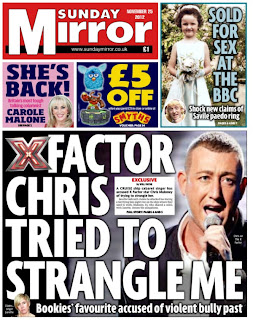 There is a story a day now which involves paedophile abuse in Britain.  The main reason is the turf war going on between the BBC and the political parties.  All are equally guilty, but who is going to carry the can?  Early attempts to pin the whole of Savile on the BBC have backfired, with Philip Schofield shooting back at Cameron with his list of Conservative paedophiles, and Newsnight attempting to expose MacAlpine.

The shots are firing back the other way again, with the Sunday Mirror sending the story back into the BBC’s own backyard.  Like the Palestinians firing puisne rockets, to be met with retaliation by the Israeli airforce, the BBC struggles for survival against a well-equipped legal and political closed shop that is not accustomed or willing to lose.

The powerful at the top are determined to make the BBC into the Savile scapegoat.

Will the BBC roll over, or will they put up more fight?  I don’t see any more coming after the stinging retaliations, but you never know.  Ben Fellowes repeated his allegations against Ken Clarke yesterday,  for example, and showed some ‘offensive’ spirit.

With the main media hamstrung, the alternative media will become increasingly important.  It will take more than one Ben Fellowes, though, to turn the war around against the paedophile power structure.    Children are sucked into the abuse system in increasing numbers by the month.  They’re taking anyone with UKIP parents even, they’re so desperate to up the numbers of victims.  The public knows what’s going on.  The fire is lit.  The smoke is rising.  Situation volatile.  It’s not over yet.

7 Responses to “Paedophilia warfare smoulders on.”