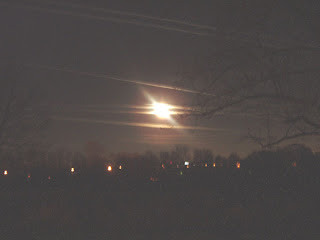 I live in Northamptonshire and have only been aware of chemtrails since january. The jets came low over my garden leaving a white dust on the surface of things and a few tiny shards of metal which we found stuck in our feet, removed by tweezers.

I remember the summer of 2011 and I seem to recall more sun and lots of birds (I moved into a new flat with my own garden and was enjoying having nature). This year there seems to have been very little sun, the birds seem fewer and those I watch have been shaking and grooming almost constantly like there is something irritating them (noticed this in the spring, it broke my heart to see, so since then I don’t watch the birds anymore). Everyday I have seen chemtrailing or the result of it as sometimes most is done at night so there is no blue sky the next day. I am a pedestrian and cyclist so I am out alot, I have felt “dry rain” and seen it in the headlight beam of my bike.

One night on a sunday I was cycling late up a country road when this chemtrail fallout/dry rain became very dense, flying into my eyes and passing through my mask. I had a fair way to go before reaching a populated area and was sure I was going to suffocate, but I pulled a piece of kitchen towel over my mask which allowed more oxygen and less particles in and I stopped going light headed and managed to cycle out of it. It was so dense it bent the beam of my torch so much I was left with basically no illumination. I have seen videos of the same stuff on Youtube by typing chemtrails gasmask fallout dust etc…but none have recorded the density I witnessed.

I am getting my rain water tested by chemtrails project UK, which I found on Twitter. They are putting together a picture of the pollution from stratospheric aerosol spraying and will be publishing a map in due time (hope we have due time).

The media are even putting chemtrails on to advertisements and childrens animated programmes. I have noticed a trailer for a wartime comedy drama with the distinctive chemtrail haze in the background. If you haven’t noticed yet, just look on any programme shot anywhere in the world, in the background visability becomes poor as there is a white haze/fog/mist call it what you like, it is from chemtrails. We see it when we look into the distance as that’s the nature of particles susspended in the air, in reality we are in that mist breathing it in, it’s inside our homes, put a torch on indoors (in darkness), you will see tiny bits of shiny dust particles, normal dust from skin etc behaves differently.

Rainwater can be tested by a site called chemtrail project UK which can be found on twitter (and dare I mention Facebook – Facebook has chemtrailing jets with poisons being sprayed out on their Twitter site) are putting together a picure of the contamination in the rainwater, which they will publish in due time. For £25.00 they send you a sample bottle which you fill and pop into an envelope and post.