Media: Britain on the way out?

TAP – the blogs tell you the story, not the MSM.  It is Merkel easing Cameron and Britain out of the EU, not Conservative backbenchers.  What will UKIP do if we are are out before the Euro elections?

Are we being kept as a haven for the Rothschilds to hang out in with their trillions safely protected from the coming Euro collapse?  Will they try to bring us into the world electronic currency that emerges after that?

UKIP’s role will have to change to opposing world government – pronto – or the party will be left high and dry – ‘rebel without a cause’.   The Farage ‘friends of Israel’ link on his profile won’t fit the new situation.  World government is Zionist.  Farage must come clean.  Is he secretly into world government and supporting Zionism, or is he going to open up his guns on the UN, the IMF, the world army (NATO), the world single currency and declare not Israeli but British independence? 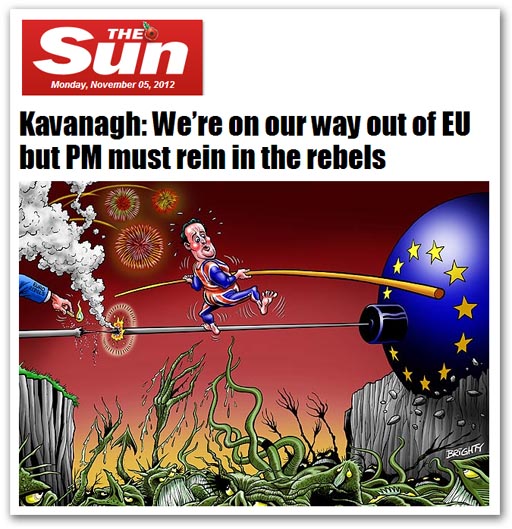 With his infinite capacity for getting it wrong, doyen of the Westminster lobby, Tevor Kavanagh, is sounding off about a subject of which he knows vanishingly little – EU politics.

The Great Ego has finally sussed that there is something amiss in this department, and with a characteristically small-minded approach to the subject, displays the Germanophobia always just under the surface with his breed.

“David Cameron”, he writes, “should tell Germany’s Angela Merkel the truth at talks in Downing Street this week – Britain is on its way OUT of Europe”, then adding, “The Iron Chancellor may think she has ways of making Britain salute the EU flag, but her host has lost the power to do so”.

One dreads to think what contagion he might have picked up had he read this blog, but slumming it is not Kavanagh’s style. Had he done so last June (below), he might have seen that the situation is exactly the reverse of what he paints. It is Merkel who is easing the UK out of the EU, and Mr Cameron who is struggling to stay in. 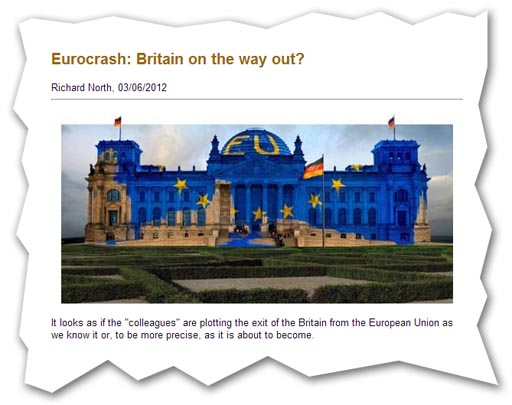 Similarly, The Great Ego misreads the “rebellion” of the 53 Tories who “joined shifty Labour to demand a CUT in Brussels’ bloated budget”. This, Kavanagh decides, was “an irreversible turning point — not just for Mr Cameron, but also for Britain as a sovereign nation state”. From now on, he says, “no Prime Minister, Tory or Labour, can quell the head of steam building across all parties for an in/out referendum”.

For once, though, I agree with Andrew Rawnsley of the loss-making Observer, on one point at least, when he brands the rebellion as “completely bogus”. It is not real and neither will it achieve anything of substance.

In a way, though, it doesn’t really matter what Kavanagh writes, or what Sun readers think. The newspaper was once a power in the land, but on this issue it is so far behind the curve that its wailing no longer has any relevance. Our fate, to a very great extent, is being decided in Berlin, but not in the way that Kavanagh thinks.
The Tap Blog is a collective of like-minded researchers and writers who’ve joined forces to distribute information and voice opinions avoided by the world’s media.