UPDATE – Recent manoevers in the McAlpine/Twitter saga  appear to have resulted in a considerable lessening of the threat to twitterers.  Those who tweeted or retweeted that McAlpine was to be named by the BBC Newsnight as a paedophile, or similar, have been asked by McAlpine’s lawyers to donate £5 to charity as their penance.   He can’t sue them all.  There are just too many.
Is this a first victory of the internet over British libel laws?  If enough numbers of people tweet an allegation, the threat to sue becomes rather academic.  The story is so quickly in the public domain, as the path from unknown to known information is made up of tens of thousands of rapid little steps, which cannot be stopped by subsequent legal threat.   It’s like trying to halt a swarm of insects with a catapult.
In fact, in this case, I think it’s fair to say that making the legal threat to twitterers has been counter productive to the threat maker.  His reputation took an even bigger hit than if he had stopped where he was, and used a different tactic with the twitter community, such as joining in with the cry for further investigation into the outrageous torture and rape of innocent children in Britain’s children’s homes.  It’s the total silence from elite secret society members about these crimes which assures us that they are almost all entirely guilty.  (other than the setting up of a ludicrous number of enquiries,  every single one of which is aimed at crushing the witnesses and victims and burying their allegations).
Steve Messham says McAlpine was wrongly identified, yet he did identify him before the inevitable reaction.
EARLIER POST –

In response to the threats made to twitterers by Lord McAlpine and his lawyers, the following tweet has gone viral.

FROM DAVID ICKE –
Please Tweet (and get others to Retweet) the following:
I hear that Lord McAlpine is the man that Steve Messham named in an unbroadcast part of his interview with the BBC. #McAlpine #DavidIcke
It has the benefit that not a single word of this statement is not true or can be challenged as not being true or is libellous in any way because it is all in the public arena.
UPDATE –
Is Lord McAlpine reading The Tap?  He’s now offering help to the charity Children In Need.  He is still chasing after twitterers, and keeping up his campaign though.  I believe that threatening twitterers will prove counterproductive. 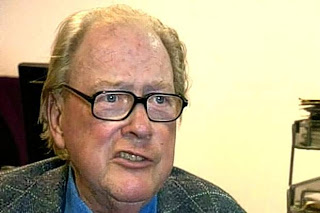 Another twist in the lip like Prince Charles.  I never trust people with this characteristic, who speak out of the corner of the mouth. 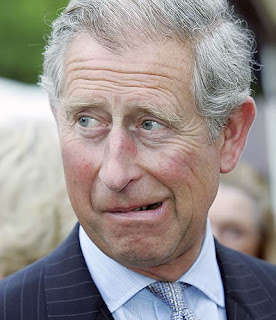 His PR machine is still in action. 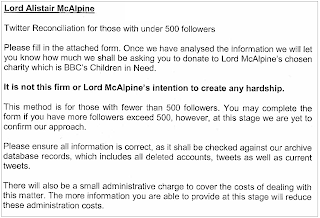 TAP – his tactic is to create fear.  He knows how effective that can be, no doubt.
aangirfan
EXTRACT –

4. Angus James Wilson was the co-founder of Scallywag Magazine, together with his half brother Simon Regan.

Angus told Simon “that he had been supplied with compromising pictures of ….”

The photos were of a top cabinet minister, alleged to be linked to the Welsh child abuse scandal.

TAP – McAlpine was wrongly identified as the abuser by Steve Messham in recent Newsnight programme.