Masons in the North Wales Police force try to hide their existence.
Child abuse is rife.
Are the two facts related? 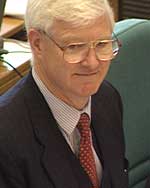 Gerard Elias QC, the leading counsel to the Waterhouse Tribunal which investigated child abuse in North Wales, ‘is a freemason.’

All across the UK, child abuse has taken place in children’s homes and schools.
Reportedly, the abusers include top people in military intelligence (think of Blunt, Burgess and Oldfield), top people in the police, top judges and top people in government.

Reportedly, the Tribunal’s own top lawyer, Gerard Elias QC, appointed by the government, ‘is a freemason’.

How many of the barristers who took part in the Tribunal were or had been masons?

“Gerard Elias is a member of perhaps the most powerful masonic lodge in Wales, Dinas Llandaf.
“The lodge, which meets in Cardiff, is made up mainly of legal professionals and members of the Conservative party, although there are members from other political groups.

“Another member of the lodge, Gwilym Jones, was the Tory MP for Cardiff North between 1983 and 1997.

“Gordon Anglesea was a retired North Wales Police superintendent who was accused by journalists of abusing young boys at a children’s home in North Wales.

“The judge was Sir Maurice Drake. He told the court that he was a member of an organisation to which Gordon Anglesea also belonged. He did not mention freemasonry but all of the legal teams on both sides knew which organisation he was referring to…

‘Anglesea was questioned also about his connection with Freemasonry,’ said the Tribunal Report, ‘because of an underlying suggestion that there had been a ‘cover-up’ in his case.’

Anglesea disclosed that he was a mason, a member of the Wrexham lodge, Pegasus lodge.
The Tap Blog is a collective of like-minded researchers and writers who’ve joined forces to distribute information and voice opinions avoided by the world’s media.