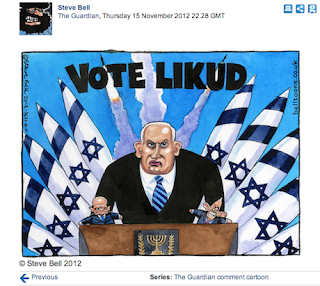 What is the message of this cartoon in the Guardian this morning? (See screen grab above.) That Jews are the puppet-masters of Western politicians? Do people still believe in that old, poisonous conspiracy theory?

TAP – The Zionist Rothschilds yes.  Jews, no.   Most Jews are just more victims of one world government, as are Palestinians in Gaza and millions of others around the globe.  The genda is controlled from somewhere.  Israel is the Rothschild’s number one world controlling device.

The Protocols of Zion read exactly like the world is today.  Of course they are real, but they are Zionist not Jewish.

Joe Biden – “I am a Zionist. You Dont Have To Be Jewish To Be A Zionist“

… it’s not often you see a politician opening their mouth and telling the truth.


TAP – Hamas going all bananas tonight, and firing multiple rockets.  You have to recall that Hamas was set up by the Zionists to take power from the Palestinian Liberation Organisation, and destabilise the peace process.  It’s worked.

One Response to “Jews are not the enemy of the Palestinians. Zionists are everyone’s enemy.”